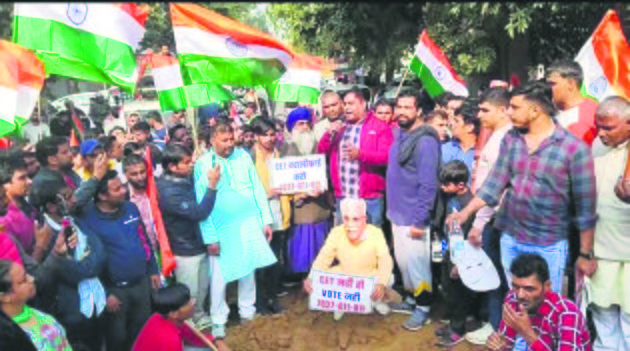 Unemployed youths in front of the BJP office in Rohtak on Tuesday.

In a novel protest, a number of unemployed youths held a dangal (wrestling contest) in front of the Haryana BJP headquarters in Rohtak on Tuesday.

The protesters then organised a wrestling match in front of the state BJP headquarters in protest against the abolition of sports quota in government jobs and not considering the CET-qualified candidates for jobs in all government departments.

Duli Chand (102), whose procession was taken out in Rohtak recently in protest against the stoppage of his old-age pension, also participated in the protest march.

“If the state leadership still does not wake up and fulfil our demands, then the next wrestling contest will be held at the state Vidhan Sabha in the next session,” said Jaihind. He said the leaders of the ruling party were also unhappy with the functioning of the BJP-JJP regime.