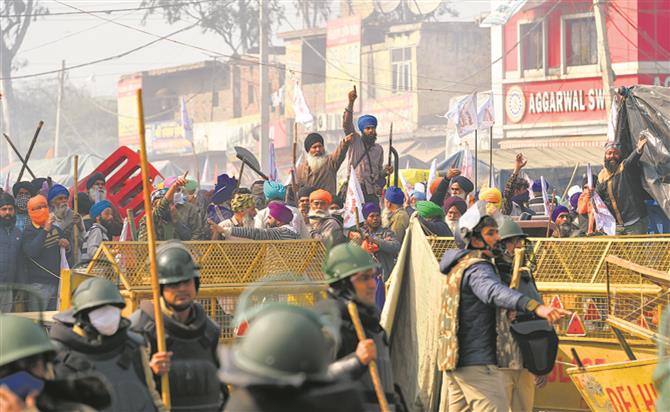 Farmers are being summoned by the police to join the probe into the criminal cases registered against them during the stir against the three farm laws.

Bid to harass us: Charuni

Farmers shouldn’t visit the police station on such notices. If they try to arrest them, we’ll protect them. We’ve sought time from the CM to discuss the issue of some farmers are being targeted and harassed by the police for their role in the stir. Gurnam Singh Charuni, BKU Chief

They alleged though the state following an agreement with the Centre on the farm laws had promised to withdraw the criminal cases, the fresh notices cast doubts on its intentions. Two farmers of Jind’s Danoda village Ashok and Satyawan said they got the notices to be present at the Sadar police station of Narwana on June 10. The notice read they were bound to appear in the Sadar police station or the cops would arrest them. Ashok said an FIR under Sections 147, 149, 283 and 341 of the IPC and Section 8 (B) National Highways Act-1956 was registered against 30 farmers, including him. “This is a bid to harass the farmers. Though the Centre had announced to withdraw all cases registered against the farmers during the agitation, but we are being served notices,” he added.

Meanwhile, sources in the Narwana police station said these farmers were involved in putting up blockades on the highway and thus they had been asked to join the probe.

BKU chief Gurnam Charuni, however, said the farmers should not visit the police station on the basis of such notices. “However, if the police will try to arrest the farmers, we will act accordingly to protect them.”

Notably, a few days ago, Jind DC Manoj Kumar cancelled an arms licence of farmer leader Azad Palwan, one of the prominent faces of the agitation, on the basis of a police report.