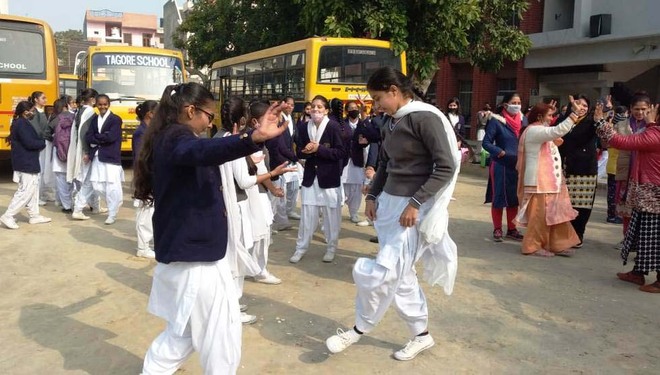 Karnal: Tagore Bal Niketan Senior Secondary School celebrated Lohri festival celebrated with pomp and zeal. NSS cadets and school staff participated in the programme. The cadets participated in a cleanliness drive on the school premises. Principal Dr Rajan Lamba lit the bonfire and greeted everyone on the occasion of Lohri and Makar Sankranti. Meanwhile, Arya Yuvati Parishad of KVA DAV College for Women, Karnal, too celebrated Lohri and Makar Sankranti and a 'yajna' in the college was also performed. Principal Sujata Gupta performed all the rituals of the 'yajna'. Senior faculty members Renu Mehta, Santosh Bisla and Jyoti Khandiya participated in the event. In all, 110 members of the teaching and non-teaching staff participated in it. Arya Yuvati Parishad Convener Dr Sushma Thakur and co-convener Dr Sabira Sharma along with members of the Arya Yuvati Parishad had organised the event.

Panipat: Delhi Public School Panipat City has secured ninth rank in the nationwide ranking of 'Education World India School Rankings 2020-21'. A total of 2,000 schools were nominated in the competition, which were to be qualified for the award on the basis of 14 scales. DPS Panipat City achieved the ninth position in the category of co-ed day-cum-boarding school in the country. The parameters for the ranking were based on education, co-educational activities, sports activities, teacher welfare and development programmes and personal focus on all round development of students. Amit Rana, Pro Vice-Chairman, DPS Panipat City, said, "This is a proud moment for all of us. We will always strive to preserve and improve the environment in which we are providing our students an atmosphere where they absorb the value of perseverance and persistence by learning new things each day."

Kurukshetra: Markanda National College, Shahabad Markanda, celebrated 158th birth anniversary of Swami Vivekananda as National Youth Day. The function was organised by the Swami Vivekananda Youth Club of the college in collaboration with Bharat Vikas Parishad, local chapter. Students were encouraged to participate in a speech competition organised on the occasion. The function was presided over by Principal Dr Ashok Kumar. North Haryana Bharat Vikas Parishad president Dr Paramjit Pahwa and Prof Amarnath Sharma were the chief guest and special guest, respectively. Dr Devraj Sharma, Nodal Officer of the Swami Vivekananda Youth Club, welcomed the dignitaries. Dr Ashok Kumar remembered Swami Vivekananda as the messenger of wisdom and highlighted the social, spiritual and patriotic works of the divine saint. The speech contest was won by Himmat Singh, followed by Rajpreet and Ankush, all students of the college. Dr Shalini Sharma, Dr Devraj Sharam and Dr Ajay Kumar Arora acted as the judges of the speech contest.

Faridabad: Officials of the JC Bose University of Science and Technology, YMCA here bid a farewell to Mohit Jain, Deputy Director, Local Audit Department, Haryana, on his transfer to Gurugram University, Gurugram. Jain had joined the university in May 2017 and rendered his services for over three years. He is replaced by Rajeev Sharma, who has been posted as Deputy Director (Audit) in the university. Earlier, Sharma was posted as Deputy Director, Municipal Corporation, Sonepat. On the occasion, Vice-Chancellor Prof Dinesh Kumar recalled the association of Jain with the university and appreciated the support provided by him during his tenure.