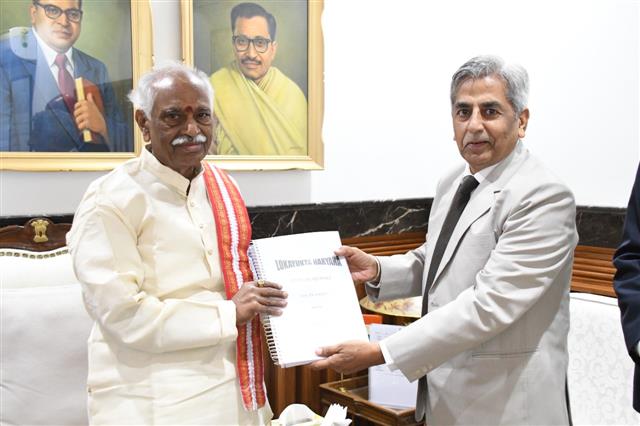 Justice Hari Pal Verma hands over the annual report of the Lokayukta office to Haryana Governor Bandaru Dattatreya on Friday.

The report has called for amendment to the Act and rules for the powers of reviewing orders and of punishing for contempt of court.

The power for punishing for contempt of court will help the Lokayukta deal with officials who are not complying with orders. Lokayukta investigates cases of corruption, where substantiated, and recommends action. The “competent authority”, who is the Chief Minister, is required to send the action taken report (ATR) on the recommendations within three months.

The annual report for 2021-22 mentioned the details of the complaints that had come to Lokayukta and orders too.

A separate cadre of officials for the office of Lokayukta has been demanded from the government so that they could work dedicatedly and confidentiality could be ensured.

Meanwhile, the government has given sanction for the post of the Joint Registrar for the Lokayukta office.