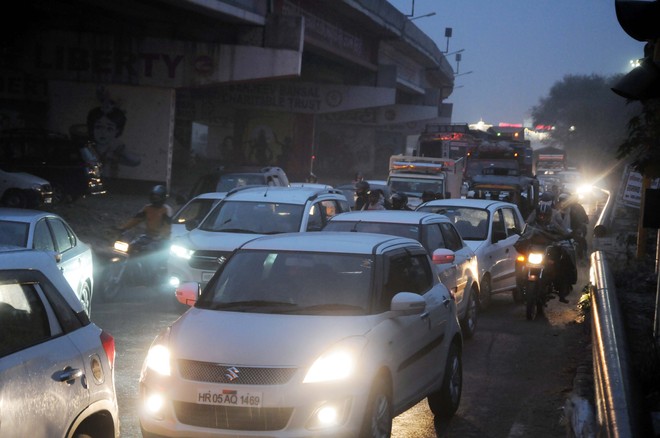 The Sonepat district administration has sealed the inter-state borders, especially the Kundli border, to stop the farmers’ movement towards Delhi. Traffic has also been diverted.

Following directions, the police allowed the vehicles to cross the borders after searching them properly. As a result, long queues of vehicles were witnessed on Kundli border since Wednesday morning. The commuters had to face problems due to a long traffic jam.

Besides, the Panipat-UP border at Sanoli has also been sealed.

Sonepat District Magistrate Shyam Lal Poonia and Panipat Duty Magistrate Manoj Kumar on Wednesday promulgated prohibitory orders under Section 144 of the CrPC banning the assembly of five or more persons in the district, organising demonstration and carrying of firearms.

Poonia appointed 19 duty magistrates in the district along with police officers to avert any untoward situation in wake of the proposed ‘Delhi Chalo’ protest.

The Panipat DM, too, deputed 20 duty magistrates in the district and also appointed special officers at Panipat toll plaza and in Samalkha near Nirankari Centre on NH-44 to stop farmers.

The ban order will remain in force till November 27 in Sonepat district and for a week in Panipat.

Sonepat DC Shyam Lal Poonia and SP Sonepat Jashandeep Singh Randhawa reviewed the security arrangements from Haldana border to Kundli border on NH-44. The administration diverted the traffic on the national highway to rural roads for hassle-free travel to people going to Delhi and Chandigarh.

The Sonepat administration has established a temporary jail at IFCI infrastructure building in Sewli village to detain farmers.

Satish Vats, DSP Headquarters, Panipat, said that two companies have been deployed at two ‘nakas’ near the toll plaza and near Nirankari centre on the national highway.

Karnal: Commuters on the national highway had to travel extra miles which, as per the commuters, has led to wastage of time and fuel. “I have to reach Chandigarh at 5 pm, but due to traffic diversion earlier in Sonepat and now in Karnal, I am already running an hour late,” said Nikhil, a resident of Chandigarh who came from Delhi.

Ambala: As thousands of farmers from the neighbouring agrarian state started marching towards Delhi via Ambala this afternoon, the heavy police force deployed at Shambhu and Saddopur barriers on Haryana-Punjab border and on Ambala-Delhi highway at Mohra put up barricades and heavy concrete boulders to block their way.