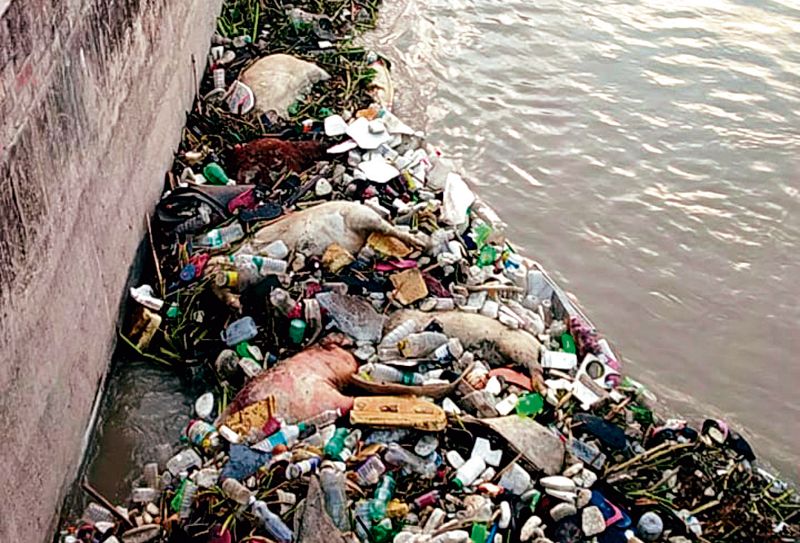 The carcasses of pigs, dogs, cows and buffaloes have been found floating in the Jawaharlal Nehru (JLN) and Bhalaut Sub-Branch (BSB) canals in the past four days.

The carcasses of pigs, dogs, cows and buffaloes have been found floating in the Jawaharlal Nehru (JLN) and Bhalaut Sub-Branch (BSB) canals in the past four days.

The Suno Nahro Ki Pukar Mission, an organisation that motivates people to keep canals clean, suspects the lumpy skin disease (LSD) to be the cause of the death. “Nearly 50 carcasses of pigs, dogs, cows and buffaloes have been brought out by the Irrigation Department from the two canals in the last four days. We have been cleaning the canals for the past nine months but have never found so many carcasses, hence we suspect the reason to be LSD, a viral disease that affects cattle,” said Jasmer Hooda, convener of the mission.

Nearly 50 carcasses of pigs, dogs, cows and buffaloes have been brought out by the Irrigation Department from two Rohtak canals in the last four days. We suspect the cause of death to be lumpy skin disease. NGO

Uploading pictures on Twitter and tagging the Chief Minister’s Office, the mission convener said the district authorities should find out where the carcasses have come from and take appropriate steps to keep the canals clean. The contamination of water was a cause of concern, Hooda added. Dr Surya Kumar Khatkar, Deputy Director, Animal Husbandry, not only denied having any information about the carcasses found in the canals but also claimed there was no case of LSD in the district. “At present, only cows have been found infected by the LSD,” he said. He, however, added that the department had been put on alert while all arrangements were in place to treat the virus-infected animals, if any. Arun Munjhal, Executive Engineer, Irrigation Department, said finding carcasses in the canal was nothing new but their count was considerable this time.