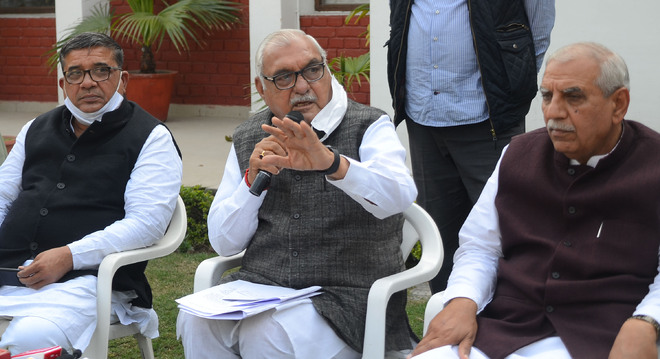 He claimed that the report was being kept under wraps as it had names which could shake up the BJP-JJP government. He addressed a press conference in this regard today.

Hooda said 40-50 people had died after drinking poisonous liquor in November last year and a big liquor scam was exposed in the state. “Similarly, the report of the registry scam has also been kept under wraps,” he said.

Hooda stated that the coalition government of the state was working on a policy of increasing unemployment, inflation and corruption. He said the government should cut down on scams if it wanted to bring in more revenue, instead of imposing taxes that added to inflation and making life difficult for people.

“In the SDO recruitment, the government has given preference to the youth of other states, bypassing the people of Haryana. A total of the 99 people have been selected for 90 general category posts, including nine on the waiting list. But out of these 99, only 22 are from Haryana,” Hooda said.

He said after the general category, the BJP-JJP government was now changing the policy with the reserved categories for Scheduled and Backward Castes.

“The government has reduced the limit of 15 years of stay for Haryana domicile to five years now, and anyone can stay in Haryana for five years and get domicile here. This will directly affect the interests of Scheduled Castes and Backward communities in Haryana. Because people of other states will be able to apply for reserved category jobs by acquiring domicile here,” he said.

He also pointed out the cancellation of recruitment of panchayat secretaries, PGT Sanskrit and now TGT English.

The Leader of Opposition raised serious questions on the new sports policy of the government and said the coalition government had completely destroyed the “Get medals, get post” policy of the Congress government. “The new policy discriminates against Para Olympians as their appointment is restricted to Group-B posts,” Hooda pointed out.