MDU to be developed as sports hub 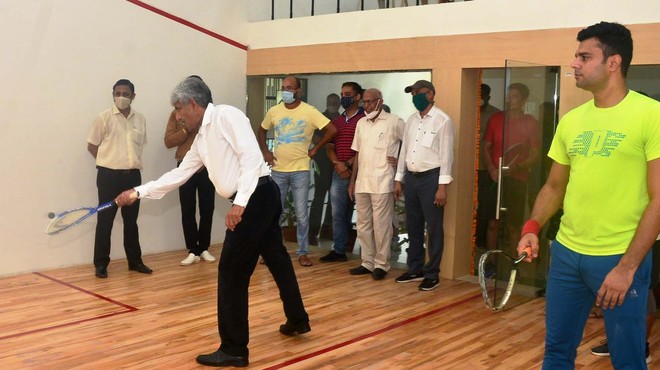 Rohtak: Maharshi Dayanand University (MDU) Vice-Chancellor Prof Rajbir Singh said the MDU will be developed as a dynamic sports hub. The university administration will boost the sports activities and upgrade sports infrastructure to promote active sports culture in the university. He stated this while inaugurating the renovated squash court in the university sports complex. The director (sports), Dr DS Dhull, briefed about the sports achievements of the university sportspersons at the national and international level. An exhibition squash match was played on the occasion.

Hisar: The speakathon club under the mentorship of training and placement cell, Guru Jambheshwar University of Science and Technology, Hisar, organised the 12th edition of 'Azadi Amritmahotsav series' in the form of "online elocution event" to commemorate the 75 years of India's Independence. This week's freedom fighter was 'Shaheed Udham Singh' as his Martyrdom Day falls on July 31. Students from various departments and affiliated colleges of the university participated in the event. Dr Sanjay Kumar from psychology department was the guest of honour for the event. He also encouraged the participants to give their best. The students expressed their views on life, struggles and sacrifices of 'Shahid Udham Singh'.

New VC takes over at CUH

Mahendragarh: Prof Tankeshwar Kumar today assumed the charge of the Vice-Chancellor at the Central University of Haryana (CUH) here. He took over the charge from outgoing VC Prof RC Kuhad while former Education Minister Ram Bilas Sharma was also present on the occasion. After taking charge, Prof Tankeshwar said implementing the National Education Policy-2020 in the CUH would be on his priority.

Faridabad: A two-day long online literary event on "polyphony" started on Thursday by the department of literature and languages of JC Bose University of Science and Technology, YMCA, Faridabad. The event was inaugurated by Vice-Chancellor Prof Dinesh Kumar. More than 150 participants attended the event, including several scholarly faculty members and students from universities across the world.