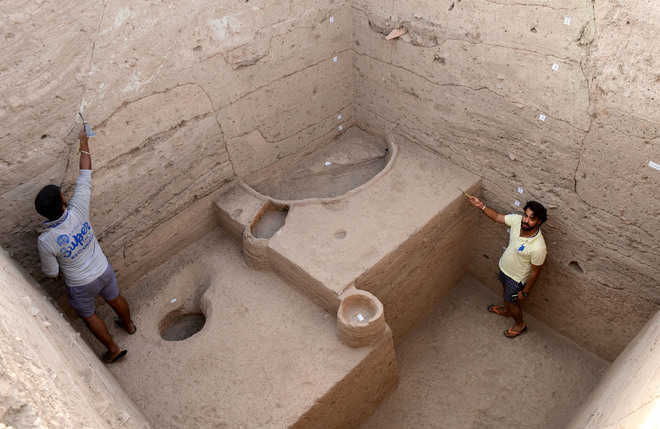 The state government has decided to construct a museum at a pre-Harappan site in Kunal village of Fatehabad district.

Ashok Khemka, principal secretary, Department of Archeology and Museums, is scheduled to visit the site in Kunal, besides the archaeological sites in Bhirrana tomorrow.

According to district officials, the government has finalised the design for the site museum, which will have three galleries besides other areas to facilitate visitors. The Public Works Department (Buildings and Roads) will construct the museum. Krishan Kumar, executive engineer of the PWD (B&R), confirmed the construction of the museum. He said the archeology department would finalise the design and other details of the project.

The officials maintained that archaeological sites in Fatehabad were among the most ancient and significant sites for the pre-Harappan era. Archaeologists in collaboration with the government department of Archaeology and Museums had carried out excavation at these sites in the past.

The site in Kunal is stated to be contemporary to the one in Bhirrana. The carbon dating of Bhirrana site revealed that it dated back to 7030 BC (9,000 years old). The excavation in Kunal has indicated that this site, too, belongs to Hakra culture.

They have found the traces of a prosperous pre-Harappan human habitation, which is believed to have existed along the banks of the Saraswati River.

The excavation carried out in a joint collaboration by the Indian Archaeological Society, National Museum and the Haryana Archaeological Department has found materials that highlighted crucial facts about lifestyle, socio-economic milieu and food habit of the people who lived along the Sarwawati in the ancient times. It’s believed to be contemporary to the Bhirrana site, about 18 km from Kunal, which is known as the oldest Indus civilisation site and belonged to pre-Harappa phase.

The discovery of gold beads and copper rings at the Kunal site during the excavation had pointed out that these were the developed village farming communities which had trade relations to other countries as the metal and precious stones were imported from far-flung places. The silver ornaments had also been found here during the previous excavation. A dwelling pit around two metre in diameter belonging to post-Neolithic phase of Hakra culture was also found.

Archeologists believe that three sites — Kunal, Bhirrana and Rakhigarhi — were contemporary habitation sites. These were Indus civilisation sites, which had flourished near Saraswati and Ghaggar rivers, an official of the department involved in excavation said.