Nearly 47,000 geo-fencing breaches in Haryana so far : The Tribune India 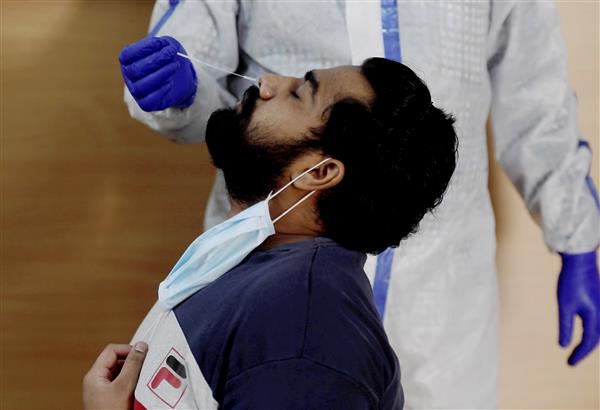 So far, 25,550 people have been telephonically advised not to breach geo-fence and to follow quarantine protocols. PTI file

As many as 46,963 people, who have been under surveillance for being suspect or infected with Covid, have committed geo-fencing breaches in Haryana so far.

The geo-fence is a 300 metre radius for a suspect or patient and if he or she goes beyond that, it gets recorded with the use of mobile tower location data or Aarogya Setu app. The police are alerted immediately about the breach.

It is home isolation which is tricky to monitor as in hospitals or Covid Care Centres, people are under constant watch. Home isolation has been allowed for asymptomatic, pre-symptomatic, very mild or mild cases since last month.

Earlier, health department staff use to monitor people under surveillance at their homes along with the police personnel, but later telecom companies were asked to share mobile tower location data.

Now, Haryana Police have been monitoring the mobile tower location and Aarogya Setu app data, and advising violators of geo-fencing telephonically or visiting their place physically for following quarantine protocols strictly. Some have been advised to download Aarogya Setu app when they deleted it.

The number of people committing geo-fencing breaches in the state is 42.3 per cent of 1.10 lakh people, who have been put under surveillance in the state so far.

In the last 24 hours alone, till 11 am today, there have been 575 breaches in the state with 389 alone from Bhiwani followed by 107 from Jind. Also, 129 people were telephonically advised to follow quarantine protocols, 74 were advised physically, and in case of 345 people the mobile phones were found switched off or Aarogya Setu app found deleted.

DGP Haryana Police Manoj Yadava said, “We do not register FIRs in these cases. Whosoever jumps geo fence, we advise him telephonically or physically go to them. We caution them. If someone repeatedly violates geo fencing, we will register FIR.”

“Earlier, the police personnel used to accompany health staff to go and check whether someone has jumped quarantine. At that time, there were limited cases. But later cases increased significantly and model was changed. Now, mobile tower location data of a person is being used,” he added.

The states like Punjab, Kerala and Tamil Nadu have also been using the same technology for surveillance of suspects and infected people.