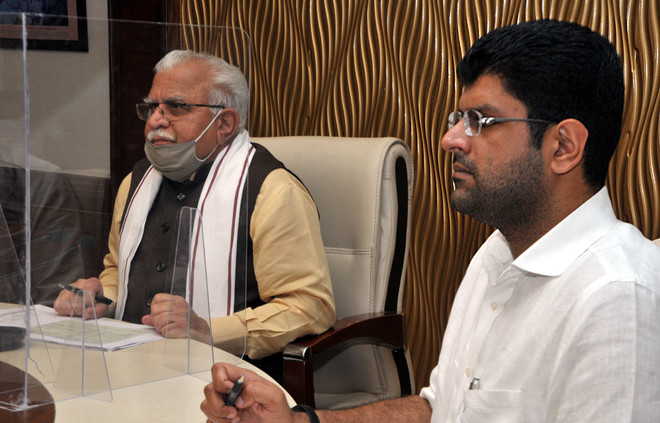 Chief Minister Manohar Lal Khattar and his deputy Dushyant Chautala at a meeting in Gurugram on Saturday. S Chandan

Chief Minister Manohar Lal Khattar has declared that the new Enterprises and Employment Policy-2020 would be implemented from November 1 to commemorate Haryana Day.

Khattar, who chaired a draft meeting of the policy along with Deputy CM Dushyant Chautala, said the policy had been prepared focusing on the growth of the MSMEs and Atmanirbhar Bharat campaign and it would not just get investments but also generate employment.

The state’s youth will be imparted skills to meet the requirement of industries for trained manpower. Dushyant Chautala, Deputy CM

“The government’s endeavour is to ensure the prosperity of the state and provide maximum employment opportunities to its youth in industrial sector. We have incorporated suggestions given by the entrepreneurs. When the present BJP government took over the reins of the state, Haryana was at the 14th position in the Ease of Doing Business rankings. But as a result of the efforts of the government, the state jumped to the sixth position and to the third rank later,” Khattar added.

The government’s focus is providing the youth with jobs in the industrial sector. When the BJP took over the reins of the state, Haryana was at the 14th position in the ease of doing business rankings. Our efforts brought the state to third position at one point of time.

Admitting to the procedural shortcomings that led to poor rankings this year, he said they would reclaim their place.

The Chief Minister said with a view to ensure that every entrepreneur was registered with the state government on a single platform, the Haryana Udhyam Memorandum (HUM) Portal had been launched recently.

Meanwhile, Dushyant said the government was focused on providing employment opportunities to the people of the state. For this, the youth of the state would be imparted skills to meet the growing requirement of industries for trained manpower, he added.