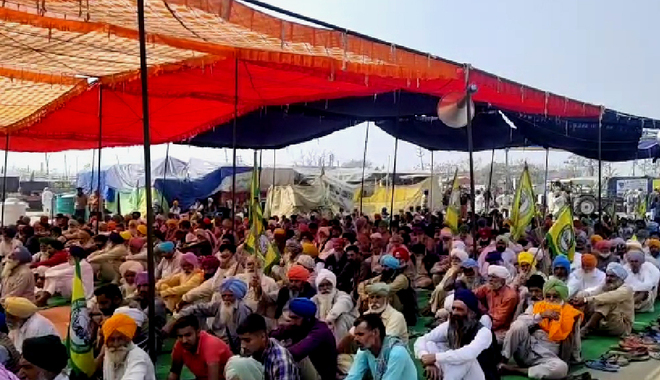 The protest site at the Tikri border covered with a tent. Photo: Sumit Tharan

The Toll Hatao Sangharsh Samiti, which has been participating in the farmers’ agitation, has announced a ‘Toll-free India’ movement to mount pressure on the Centre to repeal the three controversial farm laws.

At present, farmers have occupied toll plazas in Punjab, Haryana and Rajasthan, giving a free passage to commuters.

Samiti president Virendra Hooda made the announcement after a meeting at the Tikri border today. The meeting also decided to form committees in every state to make the ‘Toll-free India’ movement successful.

“As the Samyukt Kisan Morcha has decided to spread the farmers’ protest to other states, the samiti has chalked out a plan to picket toll plazas across the country. It is necessary to give an impetus to the movement. Initially, the ‘Toll-free India’ movement will be launched in Uttar Pradesh, Uttarakhand, Gujarat and Maharashtra,” he said.

Hooda further said it was illogical to charge toll from commuters as road tax for 15 years was charged at the time of buying a four-wheeler. “Even, one per cent extra tax is also included in petrol and diesel prices.”

The samiti has also urged private transporters to not pay tax in protest against the farm laws.

Farmers, meanwhile, pitched a tent at the main protest site at the Tikri border today to beat the approaching summer heat. Earlier, only the dais was covered while farmers sat in the open.

“Rising temperature forced us to cover the dharna spot with a tent. Like winters, we have made arrangements for braving the hot conditions. Mist fans and coolers will be installed,” a farmer leader said, adding they would not return home until the three farm laws were repealed.