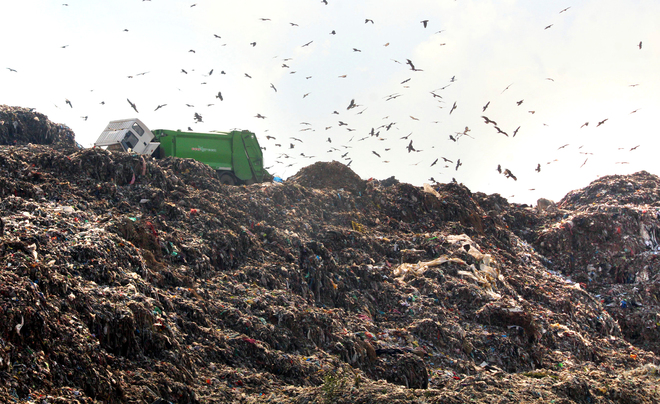 The waste treatment plant at Bandhwari in Gurugram. File

In a case related to legacy waste at the Bandhwari landfill site near Gurugram, the National Green Tribunal (NGT) has said that “it is established on record that so far there has been a serious failure of the authorities (local bodies of Gurugram and Faridabad) in performing their responsibility to effectuate the right of the citizens to clean environment”.

While disposing of the case on April 7, the NGT bench, comprising chairperson Justice Adarsh Kumar Goel, Justice Sudhir Agarwal, Justice Brijesh Sethi and expert member Dr Nagin Nanda, commented, “Though an action plan has now been filed, whether the Municipal Corporations concerned and the Urban Development Department of the State of Haryana execute the same in a mission mode and within reasonable time remains a moot question.”

It added, “Since the Tribunal has already monitored the failures of the authorities for a sufficiently long time (for five years), the State must now take ownership of its basic responsibility in the interest of the rule of law, protection of the environment and public health.”

It said the Chief Secretary “may personally monitor compliances (of NGT directions) periodically”.

The waste dumped at Bandhwari is from Gurugram and Faridabad. The case pertained to the inaction of the authorities in scientific management of the waste which has resulted in leachate being discharged, causing contamination of groundwater, polluting surface water and also polluting the air, with potential for damage to the public health and environment.

The Tribunal has observed that out of the 33 lakh tonne waste at Bandhwari, less than 1 lakh tonne waste was remediated in the last one year and if further remedial action is not taken, the unsatisfactory state of affairs may continue for an indefinite period for which no accountability is being fixed.

Earlier, the Central Pollution Control Board (CPCB), in its report dated January 13, had told the NGT that the “highest point of dumpsite is 40 m and the quantity of total waste dumped has increased to approximately 33 lakh tonnes as fresh waste at the rate of 2,000 TPD (tonnes per day) is still being dumped at the site and in its comparison, less quantity of waste is being bio-mined”.

It added that steps for decontamination of groundwater had not been taken.

In reply, the MC Gurugram told the NGT on April 5 that solid waste processing capacity had been increased by 90 per cent to 5,100 TPD by employing eight more trommels. It added that “waste to energy plant” construction would commence from October this year. The MC Faridabad told that alternative sites were being looked for the disposal of fresh waste.

In an earlier report of the CPCB, dated February 13, 2020, the damage on account of Bandhwari legacy waste dump site was Rs 148.46 crore, on account of damage to air quality, soil, and water quality, climate change and aesthetics.

Regarding compensation, the NGT ordered that as earlier decided in the case “Compliance of Municipal Solid Waste Management Rules, 2016”, each local body would pay at the rate of Rs 10 lakh per month which “may be deposited in a separate account and used for the restoration of the environment”.

The NGT has observed that at Bandhwari, the inaction of the authorities in scientific management of the waste has resulted in leachate being discharged, causing contamination of groundwater, polluting surface water and also polluting the air, with potential for damage to the public health and environment