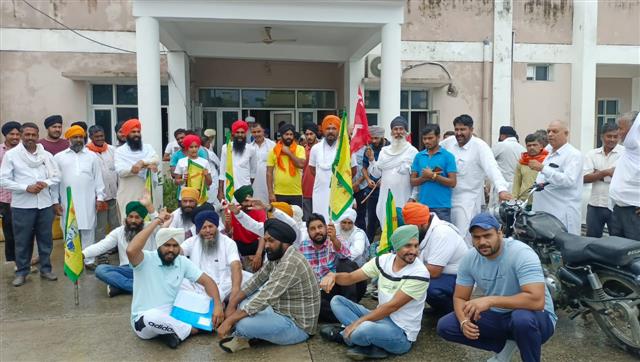 Farmers stage a dharna in Karnal on Thursday. Tribune photo

Infuriated over the non-procurement of paddy due to the ongoing strike by arhtiyas, scores of farmers, under the banner of the Bhartiya Kisan Union (BKU), protested outside the market committee office at Nissing today.

They alleged that the arhtiyas’ strike at this time was a direct attack on farmers. They asked the government to start procurement at the earliest.

Arhtiyas are on a strike on the call of the Haryana State Arhtiyas Association since September 19 due to which no procurement of paddy is taking place.

Farmers said the unprecedented rainfall had already increased their tension and the strike by the arhtiyas was adding to their woes.

Farmer leader Amandeep Singh said it was wrong on part of the arhtiyas to protest at this time when farmers had already unloaded their produce in grain markets. He threatened to launch a protest against the government and arhtiyas, if the procurement was not started at the earliest.

He said many farmers were taking their produce to Punjab or Narela in Delhi for sale. That would cause a loss to state government too, he added.

In the morning, farmers assembled in the grain market and started a protest march. Later, they staged a dharna and raised slogans against the government.