Tractors will carry flags of the union and posters with slogans of ‘Kisan Ekta Zindabad’, ‘No Farmer No Food’ and ‘Kaale Kannon Radd Karo’ 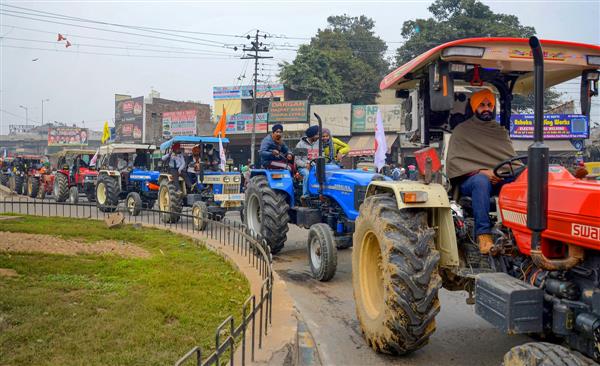 After holding rehearsals and preparations for the past few days, several batches of farmers from Punjab and Haryana will set out on Saturday to participate in proposed tractor parade on January 26 in Delhi.

Farmers unions protesting the Centre’s three farm laws had said they would go ahead with their tractor parade in Delhi on the Republic Day. They had announced to take out the tractor parade on the Outer Ring Road in Delhi.

“We all are geared up for participation in a tractor parade. Our first batch will move from Khanauri (in Sangrur) and another from from Dabwali (in Sirsa district),” Bharti Kisan Union (Ekta-Ugrahan) general secretary Sukhdev Singh Kokrikalan said on Friday.

Considering the kind of enthusiasm among people, over 30,000 tractors owing allegiance to our union will be part of the parade, he said.

Tractors would carry flags of the union and posters with slogans of “Kisan Ekta Zindabad”, “No Farmer No Food” and “Kaale Kannon Radd Karo”, said Kokrikalan.

Kokrikalan said they would also take some trolleys to accommodate women during the tractor parade.

Several women will drive tractors as part of the parade.

Many batches of farmers owing allegiance to different farm bodies would also leave for Delhi on January 24, farmer leaders said on Friday.

Farmer unions have held several tractor rallies across the state to mobilise people and prepare for the proposed parade in the past few days.

Farmers had also announced to display tableaus during the parade to showcase the plight of the farming community, they said.

One such example was seen during a tractor march in Moga on Thursday, where a tableau was mounted on a trolley, showing a farmer ploughing a field with a pair of bullocks.

“Along with bullocks, a model of farm expert MS Swaminathan was also created to seek the implementation of the Swaminathan commission report. We will take this tableau to the tractor parade,” said Moga-based artist Manjit Singh, who made the tableau.

As farmer bodies have given a call for a peaceful tractor parade, farmer unions have issued directions to their village and block-level leadership to ensure discipline during the march.

“Our union’s block-level and village-level leaders will lead the tractor march and rest will follow them,” said Kokrikalan, adding that volunteers would be deployed to keep a check on the situation.

Meanwhile, ahead of the proposed tractor parade, the demand for flags of different farm bodies has also gone up.

Several vehicles sporting the flags could be seen in Punjab and Haryana. In the wake of the farmers’ agitation and their plan to hold a tractor parade on the Republic Day, the Haryana Police on Thursday decided to cancel the leave of its personnel till further orders.

Senior Haryana Police officers were keeping a close eye on the developments related to the farmers’ stir, police sources said.

Thousands of farmers from Punjab and Haryana have been camping at Delhi’s borders for several weeks, demanding the repeal of the farm laws and a legal guarantee on the minimum support price for crops.