Recruitment drive for Agniveers gets good response in Haryana’s Hisar : The Tribune India

Recruitment drive for Agniveers gets good response in Haryana’s Hisar

Youth from Hisar, Sirsa, Fatehabad and Jind districts are eligible to participate in the drive 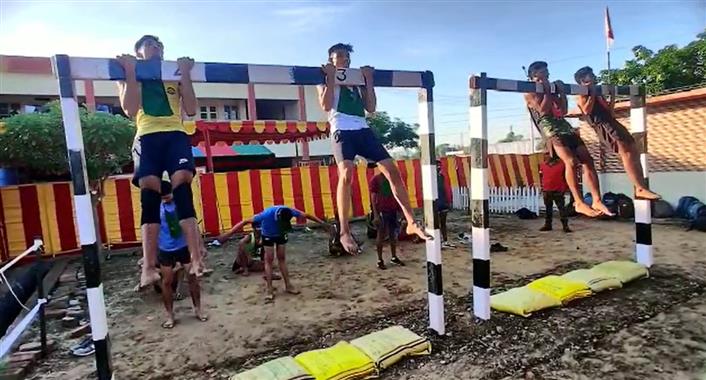 Country’s first drive for recruitment of Agniveers has started at the Military Station in Hisar. Tribune Video Grab

The Army’s recruitment drive under the newly-launched 'Agnipath’ scheme is getting good response from local youth who are aspiring to enter the Army in Hisar district.

The country’s first drive for recruitment of Agniveers has started at the Military Station in Hisar. The youth from Hisar, Sirsa, Fatehabad and Jind districts are eligible to participate in the recruitment drive which started on August 12 and will conclude on August 29.

Major General Ranjan Mahajan, who is heading the Army Recruitment Office in the region, said, “We are conducting it on the occasion of ‘Azadi ka Amrit Mahotsav’, which makes it even more significant. Four more rallies are simultaneously underway in four other cities in the country. The Army will conduct 85 rallies between August and December across the country besides 11 rallies for recruitment of women. A total of 40,000 Agniveers will be recruited in these rallies for which lakhs of youths are showing their eagerness to join the recruitment process”, he said.

Major Gen Ranjan said they have started the process with the motto of ‘Select the best through an absolutely fair and transparent process’. He said a total of nine recruitment rallies will be undertaken in Haryana, Chandigarh and Himachal Pradesh in next few months which comprises one rally for recruitment of women for Military police while eight rallies for recruitment of males personnel, he said here today.

He said they had given two years age relaxation for the candidates in this recruitment drive while the ITI passout students have been given bonus marks. The merit list of the successful candidates will be prepared on completion of the physical test, medical test and common written test.