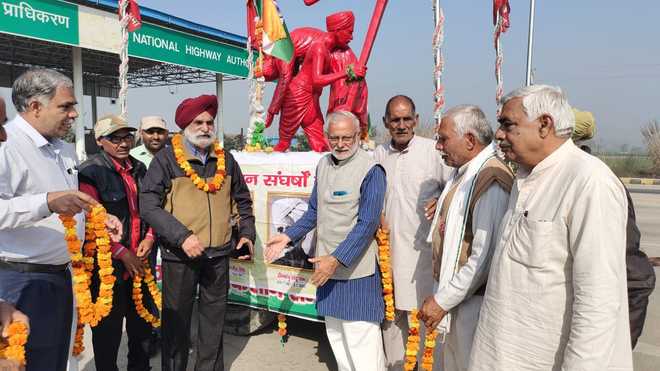 Shaheed Bhagat Singh’s nephew Prof Jagmohan Singh today demanded release of all farmers arrested by the Delhi Police during the tractor parade on January 26 and withdrawal of cases registered against farmers during the three-month-long protest.

He raised the demands at a programme organised by the All-India Kisan Sabha (AIKS) at the Rohad toll plaza on the Rohtak-Delhi national highway. The event was organised to mark the “Daman Virodhi Diwas”.

“The Modi government is pro-corporate. It becomes evident by its stance on the three contentious farm laws. The Centre is adamant on not revoking the legislations. The arrest of farmers is unjustified. They must be released immediately, while the police repression against farmers should come to an end,” said Prof Jagmohan, who is an agricultural economist.

Inderjit Singh, state vice-president, AIKS, said the “Daman Virodhi Diwas” was observed with enthusiasm, giving out the message that protesters were angry.

Earlier, Prof Jagmohan was welcomed with slogans of “Shaheed Bhagat Singh Zindabad” at the Rohad toll plaza. He was garlanded at the Madina toll plaza in Rohtak district.

Kaithal/Karnal: Farmers today pasted a memorandum of demands on the premises of the Kaithal DC’s office after they were informed that the DC was absent.

They demanded opening of all entry points to Delhi.

In Karnal, farmers handed over a memorandum of demands to the tehsildar.

Panipat: Members of the BKU and other organisations led by Sunil Dutt and Bintu Malik held a protest march to mark the “Daman Virodhi Diwas”. They later submitted a memorandum to tehsildar Kuldeep Malik.

Another from Punjab dies

Sonepat: A-65-year-old farmer from Hoshiarpur district died at the Singhu border on Wednesday. The deceased has been identified as Malkeet Singh. When he did not wake up in the morning, fellow protesters took him to the general hospital, where doctors declared him as brought dead. The police said the farmer might have died of a heart stroke. tns