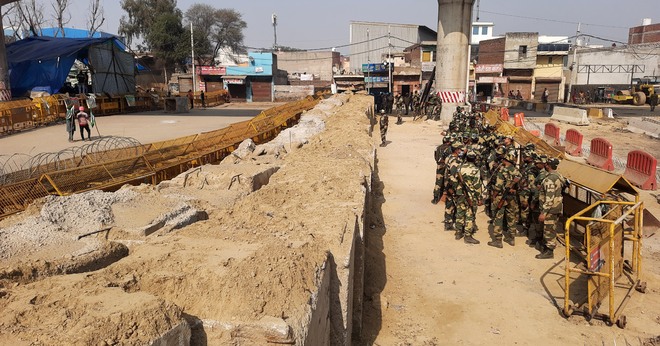 The barricades put up by the Delhi Police on Tikri border. Photo: Sumit Tharan

The Bahadurgarh Chamber of Commerce and Industries (BCCI), a body of more than 9,000 large and small units in Bahadurgarh town here, has demanded the removal of the blockade at the Tikri border, stating that the industries had suffered a total turnover loss of around Rs 20,000 crore in the past seven months, while around 2,000 units were either closed or on the verge of closure due to the blockade.

“Industrialists have been suffering from inexplicable financial and humanitarian hardships due to the sealing of the Tikri border as all vehicles carrying raw materials from Delhi or elsewhere have to take a detour, leading to the escalation of the input cost by at least 300 to 400 per cent. Most of the industries are situated near Tikri and the road facilitates complete movement from their workplace to market to run their business, but the movement remains stopped due to huts set up by the farmers,” said Narinder Chhikara, senior vice-president, BCCI, in a letter sent to Chief Minister on Thursday.

He said with no alternative road available for the movement of goods, the arrival of all vehicles was delayed, hitting the supply of raw materials, daily dispatch of ready goods and input materials. The monsoon had aggravated the problem as the industrialists were not getting access even from small kutcha roads from surrounding villages.

“Around 7.5 lakh people are directly and indirectly employed at 9,000 industries, including footwear, automobile, spare parts, and industrial manufacturing units, while a significant number of employees travel to Bahadurgarh from Delhi, but they get late in reaching the workplace due the blockade, leading to long traffic jams. Our vehicles too are getting damaged by using poorly maintained interior roads and bylanes,” said Chhikara.

He claimed the blockade was also hampering emergency movement of ambulances carrying patients resulting in delay in reaching the hospital. The situation is also taking a toll on business opportunities as foreign and domestic visitors are not visiting their units.

Industrialists submitted the letter to Bahadurgarh SDM Hitendra Sharma, demanding the CM’s intervention in the matter to ensure the removal of the blockade at the earliest.