Rs 4.47 crore to be spent on Buddhist stupa in Kurukshetra 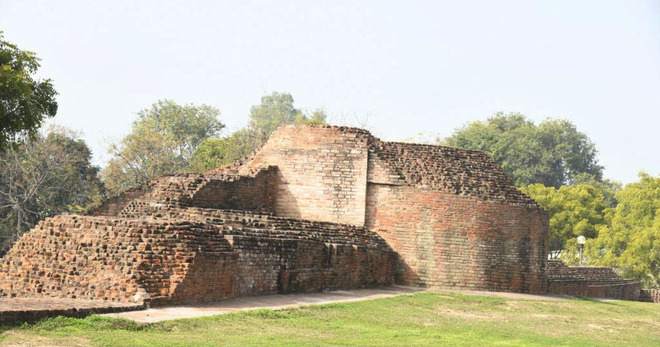 A view of the Buddhist stupa at Kurukshetra University. tribune photo

A budget of Rs 4.47 crore will be spent on developing the mound of ancient Buddhist stupa situated at Kurukshetra University.

As per the PWD (B&R), the site is under the Department of Archaeology and Museums, Haryana, and it has entrusted the PWD to execute the project. As per information, the site is among the state-protected monuments and sites.

The Executive Engineer, PWD (B&R), Arun Bhatia, said, “A tender was floated for the project and it has been received. Its technical bid will be opened at the headquarters and the tender will be allotted this month. The project is set to start in February. Besides the beautification work, pathways, eatery shops, and toilet blocks will be constructed under this project. A budget of Rs 4.47 crore has been received from the Archaeology Department.”

The Deputy Director, Department of Archaeology and Museums, Haryana, Dr Banani Bhattacharyya, said, “Buddhist stupa is an iconic site and it is being developed accordingly. We will preserve the mound and the sanctity of the site. A garden will be developed there and there will gazebo and fountain. There is also a provision to install a statue of Buddha. The tree plantation will be carried out by the Forest Department. The construction work has been handed over to the PWD (B&R).”

Thanesar MLA Subhash Sudha said, “Different projects are being carried out in Thanesar to develop it as a major tourist destination. A proposal to develop the Buddhist stupa situated at Kurukshetra University was sent to the state government and it was cleared. The project will start in February and it is to be completed within a year. Every year, lakhs of pilgrims and visitors come to Kurukshetra. After the completion of the project, it will become a new tourist destination near the Brahma Sarovar and we are hopeful that it will attract more visitors.”