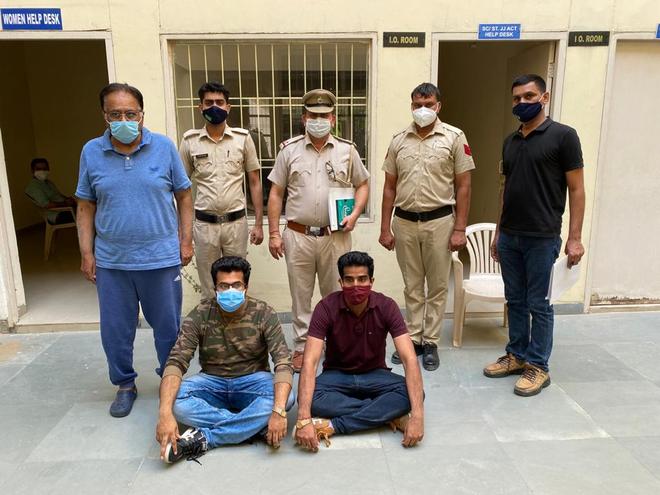 The accused in custody of the Gurugram police. Tribune photo

An RTI activist and self-proclaimed whistleblower, Harinder Dhingra, and his two sons were arrested on Monday for committing a fraud of over Rs 15 crore.

Harinder allegedly mortgaged the same property to several banks, took loans and never returned. A SIT has been formed for further investigation into the case.

Probe revealed that Harinder and his partner Ravindra Yadav took advantage of the RTI Act with the intention of pressuring banks, government staff or officers to make money. They also grabbed a land in the DLF area and Harinder was booked in 2017.

His sons have been identified as Prashant Dhingra and Tarun Dhingra of Gurugram. Harinder’s wife Poonam Dhingra, his minor grandson Garv Dhingra and Prashant’s wife Tani Dhingra too are the key accused in the case.

According to the police, a complaint was received on April 16 against Harinder, his wife and two sons that they had mortgaged their plot located in DLF Phase 1 in 2003 through their firm M/s Elegance Fabrics Private Limited. He mortgaged the same property to the OBC Bank through another firm named Tarun Exports and took a loan of around Rs 15 crore. The accused allegedly submitted false documents in the court and also transferred the same property in blood relation in the name of Tarun and Garv.

An inquiry was conducted by a gazetted officer who found that Harinder and his wife Poonam jointly bought the plot in 2001. As per the record of the Indian Overseas Bank, Poonam and her son Prashant had taken a loan through their firm M/s Elegance Fabrics Private Limited on personal guarantee in 2003. After the loan got a non-performing asset (NPA) in a conspiracy with Prashant moved to court against his father-mother and claimed the plot. On November 27, 2006, as per the order of Lok Adalat, Prashant was declared the owner of the plot. In 2007, Tarun mortgaged the same property with the OBC Bank and got of loan of Rs 8 crore, while it was again classified as the NPA in 2008.

When the bank issued a notice, Tarun’s son Garv moved a Gurugram court and also filed a petition in the Punjab and Haryana High Court for the cancellation of the Lok Adalat order. On February 8, 2016, the Gurugram court cancelled the Lok Adalat order and Harinder and Poonam got the ownership of the plot again. Soon after, they made a transfer deed in the name of Tarun, Garv and Prashant. During investigation, it was revealed that the family got Rs 15 crore loan from bank fraudulently.

“The Gurugram police have urged the public to inform them in case any person has any information or document against Harinder and his associates. We will take an action against them as per the law,” said Karan Goel, ACP, DLF.