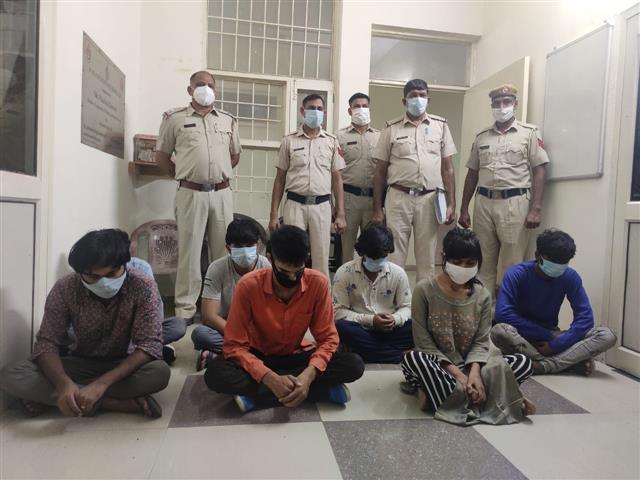 Salesgirl Sonia Sharma with her accomplices in police custody at Rohtak on Thursday. Tribune photo

The police have arrested Sonia Sharma, a 21-year-old woman employed at Tanishq jewellery showroom in Rohtak as a sales representative, for having stolen gold and diamond jewellery from the showroom last week. She was arrested from Shahjahanpur in Uttar Pradesh.

Rohtak SP Rahul Sharma said five male accomplices of the salesgirl had also been arrested and stolen jewellery worth Rs 1.5 crore recovered from their possession.

“Of the 71 jewellery items stolen from the showroom, 68 items and a molten lump of gold weighing about 120 grams have been recovered from the possession of the arrested persons,” the SP maintained.

Sonia and her five accomplices aged between 19 and 24 years, four of whom are from Rohtak and one from Noida in Uttar Pradesh, were produced before a local court today, which remanded all of them in police custody for two days.

As per the police investigators, Sonia planned the theft with her friend Arvind and handed over the stolen jewellery to Rohit.

Shiv Kumar, who is a goldsmith, tried to melt the jewellery. She also moved around with Amit and Himanshu.