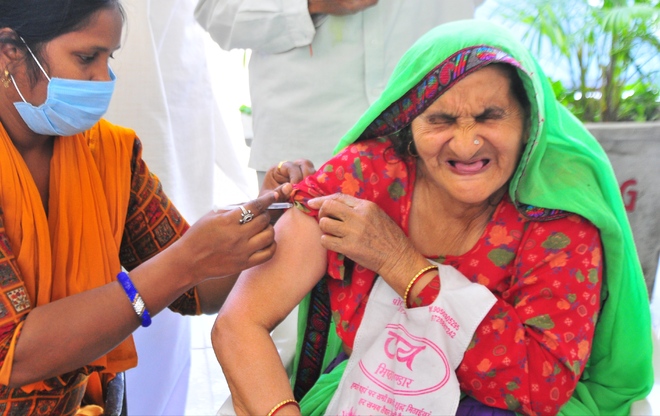 An elderly woman takes the jab in Gurugram on Thursday. S Chandan

Even as 81 per cent of the samples sent from neighbouring Punjab for genome sequencing have tested positive for the UK variant of Covid-19, only six samples from Haryana have so far been reported from this new strain of the virus.

The state, however, is waiting for reports from the National Institute of Biologicals for samples sent in the recent past.

“As on date, we have found total six cases positive for the UK variant, out of which five cases were foreign travellers and 1 case from general population. This one case was a prisoner who had already been shifted to Sangrur (Punjab),” said Rajeev Arora, additional chief secretary, health and family welfare, Haryana.

He said the government had requested the National Centre for Disease Control (NCDC) to conduct a thorough epidemiological investigation to assess the community level transmission of the UK variant in this case which was conducted later on and nothing suggestive was found. Sources in the Health Department, however, said reports of a large number of samples sent for genome sequencing in the recent days were yet to be received.

As per the norms, the state is supposed to send 5 per cent of the total samples to the central lab for genome sequencing of the virus to know the presence of the mutant variants.

With new daily cases crossing 100-mark today, Haryana has witnessed a spurt in the Covid-19 cases recently and the state Home and Health Minister Anil Vij had yesterday banned public celebration of Holi festival in the state.

The Haryana government has intensified its campaign for vaccination and so far 12.61 lakh doses of Covid-19 vaccines have been administered. Most of the new cases are coming from Gurugram, Panchkula, Ambala, Karnal and Kurukshetra districts