Stir anniversary: Farmers gear up for show of strength 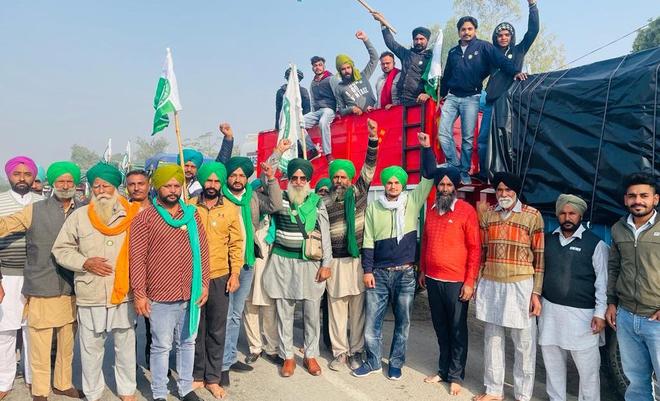 In HIGH SPIRITS: A group of farmers arrive at the Singhu border on Wednesday. Tribune photos

Despite the Prime Minister’s announcement to repeal the three agricultural laws, the protesting farmers are gearing up for a show of strength on the first anniversary of the farm movement at the Delhi borders on Friday.

Notably, a handful of farmers were left at the Singhu and Tikri borders, with scores of tents, huts, shelters and sheds lying vacant for a long time. Also, maximum Punjab and Haryana farmers had returned to their fields due to the paddy season.

Earlier this month, the Samyukt Kisan Morcha (SKM) had announced to mark the first anniversary of the stir at the Delhi borders and also asked the farm unions to bring a large number of supporters to the protest sites. Soon after, the leaders started mobilising the farmers and asked them to reach Singhu and Tikri. They claimed that thousands of farmers would start arriving at the borders on Thursday.

“All preparations to mark the first anniversary of the farmers’ movement are on in full swing and our teams will start moving towards Delhi borders on Thursday,” says Kulwant Singh Sandhu, general secretary, Jamhuri Kisan Sabha.

“There is a great enthusiasm among people in Punjab to become a part of the victorious first anniversary of the farmers’ movement as the day is very special for them,” he added.

Meanwhile, Harinder Singh Lakhowal, general secretary, Bharatiya Kisan Union (Lakhowal), said they were all set to mark the day. Farmers in Punjab villages were quite excited and preparing to reach Singhu and Tikri for the big day, he added.

Abhimanyu Kuhar, farm leader of Haryana, said thousands of farmers from villages in the state would arrive at Singhu and Tikri on Friday to celebrate the repeal of the three farm laws. Village-wise duties had been appointed across the state to mobilise the farmers, he added. The protest sites would again witness a huge number of farmers on Friday, he claimed.