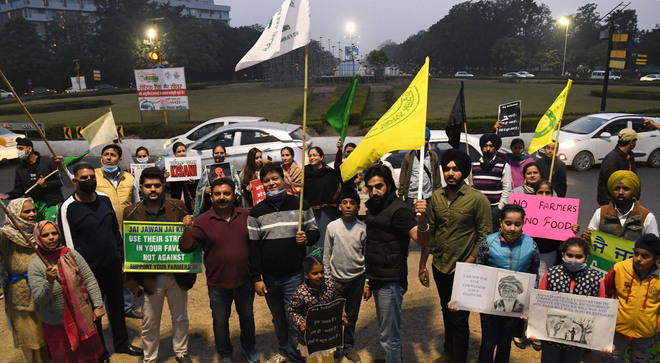 No formal authority, leader or organisation spearheading the Matka Chowk protest is a testimony to a people’s movement, where several have joined in on their own will to support the farmers’ call for revoking the three agriculture laws.

Girls, who have been protesting at Matka Chowk, said crass comments from passersby were an irritant. Danica Sharma and Jarvia Kler, both 18, said they had been protesting since January. “We come here with our mothers. Usually, when the crowds start thinning out, commuters threaten us and pass comments. But we are not scared. We just ignore them. If this is happening to us here, we can imagine what Nodeep Kaur and Disha Ravi might be going through,” they said.

Rajwinder Kaur, aka Raj Gill, 38, a resident of Khuda Ali Sher, is one of the first few people to have been protesting at the chowk. “My daughter and I have been coming here since December 9,” she says. “At that time, we were the only females here. Back then, we didn’t even have flags or posters. We didn’t have any idea of how to protest, so I took a dupatta, penned slogans on it and stood at the chowk. As days passed, more people joined in,” she says.

At present, the Matka Chowk protesters have connected with each other through many WhatsApp groups.

Sukhpal Singh, a retired Central Government employee, says he joined the protesters at Matka Chowk to provide them with milk. “I wasn’t invited here or anything,” he says. “In January, we saw 30-odd youngsters here and decided to do a milk ‘seva’. I am a member of the Farmers’ Welfare Society of Punjab. It’s a registered society and was started by my friends. We have been helping people at the Singhu border by providing them with portable toilets and a projector,” he adds. Akashdeep Sindhu, 23, who hails from Karnal and is a national athelete, would go to a gym in Sector 8. Matka Chowk is on his way to the gym. He’s doing an MBA from the PTU, Khanna, and is a former student of Khalsa College in Chandigarh. He says: “I would go to the gym daily and would see people gathered here. I’m from Haryana and my parents have been going to Delhi regularly. My training is here and I can’t go to Delhi. I was consumed by guilt. So, I stand here and support our farmers.”

Akashdeep says: “As a good Indian citizen, I don’t think your duties end at voting. It’s more important to keep a tab on government’s policies too. I have been coming since January 16. Us education ka koi fayada nai jo society kaam na aaye (what’s the use of education that doesn’t help society).”

Divya Suhag, 28, is preparing for an MBA in the US. “I was preparing for UPSC and have studied BJP’s economic policies. I’m here because I know the laws are flawed. I’ve been here for a month now with my parents. I just saw people here and joined them. I’m not a part of any of their WhatsApp group or anything as such,” she says.