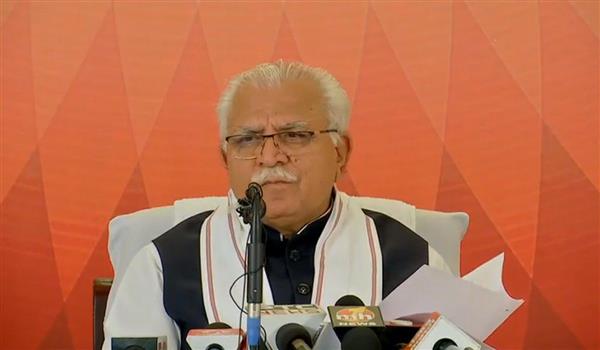 Harsh Mohan Bhardwaj, a former member of the Haryana Staff Selection Commission, who was threatened to be beheaded by Haryana Chief Minister Manohar Lal Khattar during a ‘Jan-aashirwad yatra’ in September-2019, joined the Congress at a public meeting of Rajya Sabha MP Deepender Singh Hooda here on Saturday.

As Khattar was wielding a ‘farsa’ presented to him during the yatra, Bhardwaj, who was considered close to the Chief Minister, tried to tie a silver crown on his head. Khattar got annoyed and threatened Bhardwaj with beheading.

The episode went viral on social media and was decried by the Opposition leaders. Khattar later clarified that the BJP regime had ended the practice of tying silver and gold crowns and he was annoyed as their supporter was still trying to do that.

Bhardwaj, who went into oblivion after that episode, resurfaced at a social function at Barwala town on Saturday where he tied a silver crown to Deepender.

He, however, claimed that he was not associated with the BJP or any other political party and had extended his support to the Congress MP on being invited by him.