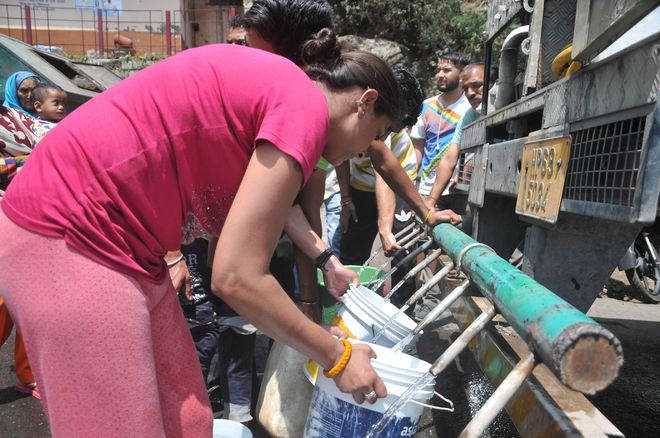 The potable water crisis has hit many towns in the region due to shortage in the supply of raw canal water to the waterworks.

The potable water crisis has hit many towns in the region due to shortage in the supply of raw canal water to the waterworks.

Residents of many localities in Hisar, Bhiwani Charkhi Dadri towns are getting inadequate and brackish water supply from the Public Health Engineering Department (PHED). The department says it has to supply water extracted from underground borewells in the absence of canal water.

In many other localities like Patel Nagar, Jawahar Nagar, the Satrod area, Hanuman Colony, Balmiki Colony, the water supply has been cut down to once in a day and the time of the supply too has been shortened. Mahender Juneja, municipal corporation member, said he had been raising the issue with the PHED officials but all in vain. He said polluted water was also supplied in some pockets.

Recently, several residents of Hanuman Colony were booked when they staged a dharna and demonstration outside the waterworks of the Public Health Engineering Department in Hisar against the issue.

The PHED Senior Engineer, TR Panwar, lodged a complaint with the police alleging that the protesters had misbehaved with the staff and also locked the office and had obstructed public servants from discharging their duties. The police spokesperson informed that a case under Sections 147, 149, 294, 342, 186, 353 and 506 of the IPC had been registered against 60 persons.

In Bhiwani town, residents of Sector 13 and some other localities alleged that they had been facing water shortage and the problem had aggravated with the advent of summer. They said the district administration promised them that another pipeline would be laid for the smooth supply of water but the projects was lying in limbo for several months.Similarly, residents of Charkhi Dadri town alleged that the PHED had been providing water supply from the borewell as the canal water had dried up in the waterworks. Deepak Sheoran, a MC member, said the two waterworks were insufficient to fulfill the need of the town as the water requirement had almost doubled in the past couple of years. “To ensure water supply, the PHED tubewells is supplying water, but the groundwater is not fit for consumption”, he said.

Executive Engineer, PHED, Charkhi Dadri, Shashi Kant said they supply borewell water only after canal water dried up in the waterworks. “The Irrigation Department has assured us that the canal water will be available by tomorrow”, he said.