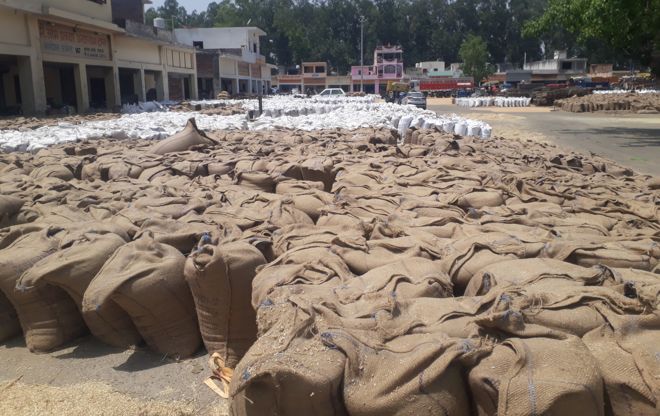 Wheat bags at the new grain market of Jagadhri in Yamunangar district.

The grain markets of Yamunanagar district witnessed a record drop of 42.29 per cent in the arrival of wheat till April 26 as compared to the corresponding period last year.

Sources associated with grain markets said this had happened due to the low yield of wheat.

The low yield has adversely affected the financial condition of farmers and business of arhtiyas (commission agents).

According to the record of the District Food Civil Supplies and Consumer Affairs Department, Yamunanagar, only 1,85,416 MT of wheat has been procured in all 13 grain markets of Yamunanagar district till April 26.

However, 3,21,317 MT of wheat had been procured last year during this period.

Besides impacting the income of farmers, the low yield has adversely hit the business of arhtiyas as their commission and recovery of money borrowed (taken as advance money) by farmers from them depend on the arrival of wheat in the grain market.

A farmer said he borrowed money from his arhtiyas for the sowing of the wheat crop, but he was finding it difficult to return that money due to the low yield of wheat. “I need money to sow the next crop of paddy but I am upset as I have even failed to return the money that I had borrowed for the wheat crop from my arhtiyas,” said the farmer.

Another farmer Brijesh Kumar said following low production, the rates of wheat straw had reached Rs 11,000-12,000 per acre this year from about Rs 7,000 per acre of the previous year.

He, however, said the farmers were not able to take the benefit. “Farmers have suffered a huge financial loss due to the low yield of wheat. They were hopeful that some of their losses would be covered by the increased rates of wheat straw. The major buyers of our wheat straw are from Himachal Pradesh, which shares border with Yamunanagar district, but the local administration has imposed a ban on the transportation of dry fodder to other states,” he said.