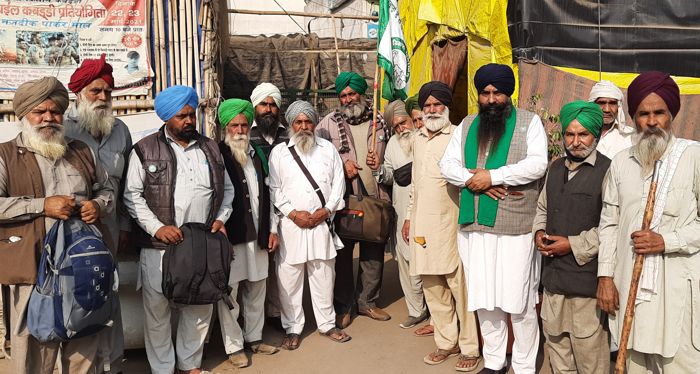 Punjab farmers reach the Tikri border to mark the anniversary of the protest. Photo: Sumit Tharan

Farmers from Haryana, especially Hisar, Jind, Sirsa and Bhiwani districts, have left no stone unturned to make the farmers’ agitation a success during the past year. People from the rural belt in these districts ensured regular and uninterrupted supply of manpower and resources required to get the agitation going at the Delhi borders.

As farmers from Sangrur, Moga and Mansa districts of Punjab started marching toward the national capital last year, they had to pass through Haryana via Sirsa and Tohana to reach Rohtak-Delhi on national highway 9 and from Data Singhwala border in Jind district.

Though the Haryana Government took Haryana farmer leaders in custody as a precautionary measure and raised roadblocks for them on these three routes, farmers from Punjab received immense support from the farmers and people of the state along these routes.

Ramraji Dhull, a BKU leader from Jind who was present at Data Singhwala village on Jind-Sangrur border at that time, recalled that despite the massive deployment of police forces, there was no stopping for the tractor-trolleys of Punjab farmers.

“They were filled with enthusiasm and determination. We were taken by surprise by their steely nerves. As the state government blocked the roads, farmers gave way to their tractors from their fields which had their standing crops of mustard and wheat,” he stated. Kapoor Singh, a farmer from Kirtan village in Hisar district, has devoted most of his time at Tikri in the past year.

En route to Tikri, one dies in mishap

Sonepat: A 50-year-old farmer died in an accident while another 75-year-old farmer sustained injuries in a mishap near Mahra village on Gohana-Rohtak road on Wednesday night. A group of farmers in a tractor-trailer was on the way to Tikri border