Women shying away from electioneering in Ellenabad's Bagri belt : The Tribune India

Women shying away from electioneering in Ellenabad's Bagri belt 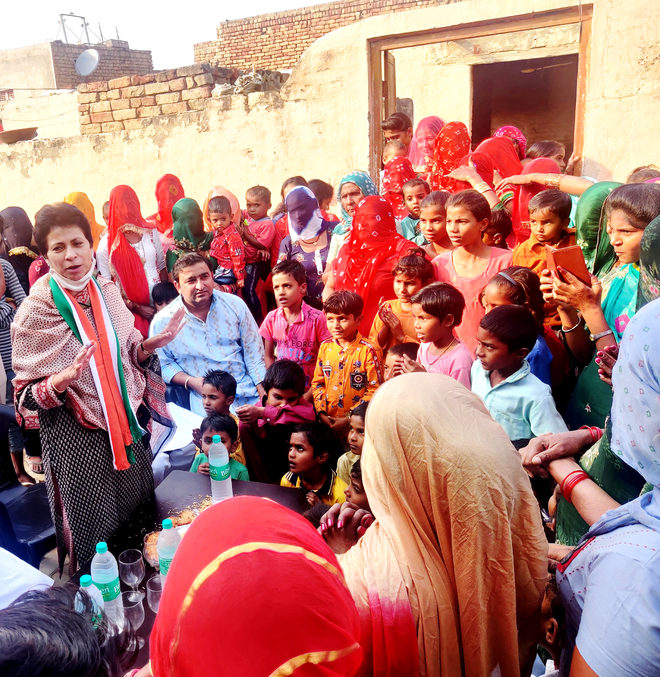 Village women in veils attend a public meeting on Monday.

The Bagri belt in Ellenabad is still to break the socio-economic shackles for women who are seen only in “ghoonghat” (veil) in this Assembly segment during the campaigning by the political parties.

The shying away of women from electioneering, however, does not mean low turnout compared to other parts of the state.

The figures of the polling in the previous elections revealed that there is not much difference in the voting percentage of women in Ellenabad compared to other segments. Social activists maintained that patriarchal mindset dominates this region and men take pride in the tradition of keeping the women within the four walls of their houses.

A group of four college pass-out girls, during an interaction with this correspondent outside the employment office in Ellenabad, said they were aspiring for a government job. When asked about trends in the bypoll, they failed to recall the names of the candidates in the poll fray. “I aspire to get a government job. My family has also allowed me to complete higher education as I have just passed out MCom from a college in Ellenabad, which is 25 km from my village,” she said, refusing to divulge her name.

Another girl standing beside her said she knew the names of Savita Duggal, MP from Sirsa and also voted for him. “We have also heard of Kumari Selja and the Chautala family, which is popular in the region,” she said.

Devi Lal, a resident of Dhukra village, said the traditions of social and financial freedom had still not reached this region, which is socially and culturally closer to Rajasthan than other Haryana areas. “People in this region have matrimonial relationships in Rajasthan. Though large land holding and good crop due to irrigation facilities have ushered in prosperity in most of this area, they are still to move forward in tandem with the rest of Haryana socially and culturally,” he added.

Balbir Kaur Gandhi, a social activist based in Sirsa, said “ghoonghat” is termed as “gehna” (jewellery) of women and it symbolises honour of family and pride of menfolk. “There has been a lack of an effective social campaign for women empowerment in this region, especially the Bagri belt in Ellenabad, which comprises “paintalisa” (45 villages). “The condition of women is comparatively better in the Punjabi belt though. I had a chance to interact with the women during a social awareness campaign some years ago and realised that they were still to unwind the shackles of patriarchy. Even in urban areas, their involvement in the business and shops is minimal,” she said.