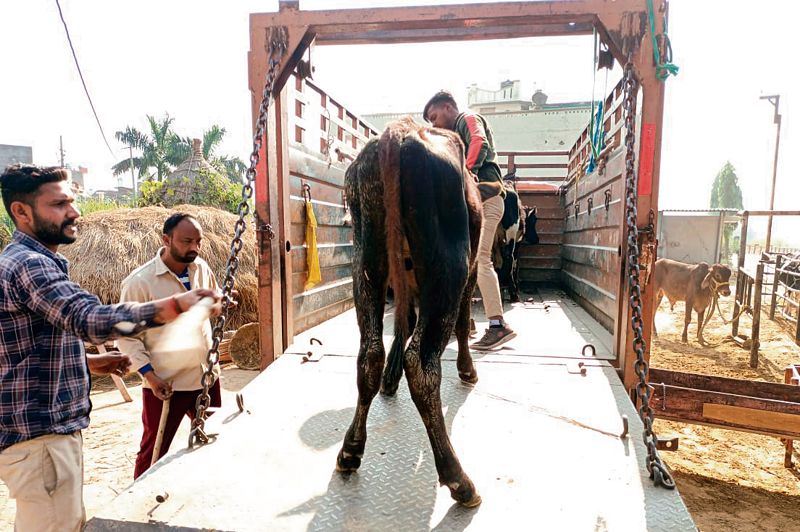 In a relief to commuters and residents, the Municipal Corporation, Yamunanagar-Jagadhri (MCYJ), has begun a drive to catch stray cattle.

On the first day of the drive, a team constituted on the direction of Ajay Singh Tomar, Municipal Commissioner of MCYJ, caught 10 stray cattle mainly cows from the Buria Chowk area of Jagadhri today and left them in the gaushala of Jagadhri.

The stray animals are turning into a source of inconvenience and danger as it is common to find herds of these wandering on roads, residential areas, grain markets and other places in Yamunanagar and Jagadhri.

He said this drive would continue in the future also to solve the problem of stray cattle.

According to information, the authorities of the MCYJ were getting complaints from residents about the problems being faced by them due to stray cattle.

“There is no end to stray cattle menace in Yamunanagar and Jagadhri. Stray cattle, including cows, calves and bulls can be easily seen on road sides, market places and residential areas foraging on vegetable and fruit wastes,” said Manga Ram, a resident of Saraswati Colony, Jagadhri.

He said the stray animals along the busy roads caused accidents every day, particularly at night, mostly involving two-wheelers.

“Farmers and dairy owners abandon their cows and buffaloes once they stop producing milk. Therefore, the number of stray cattle has increased tremendously in the past some years. These cattle roam around the city leading to traffic jams and accidents,” said Manga Ram.

Deepak Kumar of the ITI area of Yamunanagar said the authorities of MCYJ had totally failed to solve the problem of stray cattle.