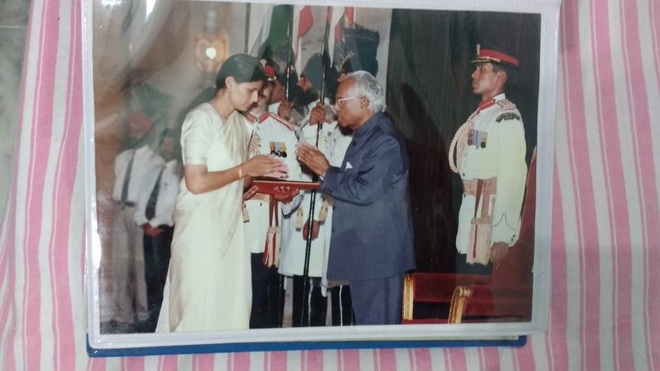 Master Umrao Singh Gahlawat of Kheri Sadh village in Rohtak district was blessed with three sons. Two of them joined the Army, both in infantry. While Sajjan Singh, the elder one, was commissioned in the Madras Regiment, the younger Dilbag Singh got recruited in the Jat Regiment.

Sajjan Singh was born on June 8, 1966, at Kheri Sadh village in Rohtak district of Haryana. After primary from High School, Gohana, Sajjan got admission to Sainik School, Kunjpura (Karnal) on merit. After senior secondary from his alma mater, he was selected for the National Defense Academy (NDA), the best tri-services academy in the world. After three years at NDA and one year training at the Indian Military Academy, Dehradun, Sajjan Singh Gahlawat was commissioned into the 9th Battalion of the Madras Infantry Regiment on June 11, 1988. During the encounter with militants, Sajjan Singh Gahlawat, now a Major, was commanding a company of the 9th Madras Battalion deployed in Poonch district of Jammu and Kashmir.

A small town named Surankote between Rajauri and Poonch in Jammu and Kashmir happens to be one of the gateways for militants to enter the Kashmir valley, often undetected. The militants often crossed the Line of Control (LOC) between Poonch and Krishna Ghati at night and before day break reached Surankote or the villages around which had gradually become safe havens for them to remain in hiding during the day.

From there, after an overnight trek astride old Mughal Route via Bafliaz, militants cross the Pir Panjal Range, rolled down westwards and before day break, they are in Kashmir Valley where almost every house, every hamlet and every village is a potential hideout for them. Locals, probably out of fear, too, help militants by not just hiding them but also providing them the information about the deployment of security forces in the areas around.

Sangilian is one such village between the Line of Control (LOC) and Surankote that was believed to be the hideout of militants. Villagers often assisted militants in their encounter with the security forces in the areas of their influence. It is in this fateful village, that Major Sajjan Singh Gahlawat during encounter with militants laid down his life for the motherland and deservedly earned the Shaurya Chakra.

Major Sajjan Singh Gahlawat, SC, was a Kunjeyan - a pass out from Sainik School Kunjpura. The Kunjeyans belong to an elite institution which is considered the nursery that nurtures bravehearts. Among six Ashok Chakra (the highest peace-time gallantry award) awardees from Haryana, Major Rajiv Joon from Gaddhi Kheri village in Rohtak district and Lieutenant Ram Prakash Roperia from Pali village in Hisar district are Kunjeyans.

Kamlesh, wife of Major Sajjan Singh Gahlawat, SC, recalls: "Sajjan often remarked 'why sainik schools don't admit girls. I want my daughter to be a Kunjeyan like me and don the combat fatigues like her father'." Sunaina, his daughter, could not be a Kunjeyan like her father but in whichever school she studied, she put in her best and made herself worthy enough to don the Army combat fatigues, her father's wish which her mother often reminded her of. Sunaina is now a serving Captain in the Army Service Corps. Even Lovedeep, his son followed into the footsteps of his brave father and was recently commissioned into the Indian Air Force.

"On October 23, 1997, it was gathered from the intelligence inputs that some militants were hiding in Sangilian village, near Surankote, in Poonch district of Jammu and Kashmir. Major Sajjan Singh Gahlawat, the company commander in the 9th Madras, was tasked to flush out and apprehend militants. While Major Gahlawat along with his company was carrying out search of the village, he was fired upon by militants from a hideout, in which one Havildar of his company was seriously injured. Realising grave danger to the Havildar and to his other comrades who were caught in the open, Major Gahlawat in a daring move dashed to engage militants from a flank, so that the injured Havildar could be rescued and evacuated. He then with absolute disregard to personal safety unflinchingly advanced in the hail of bullets and lobbed a hand grenade in the hideout killing two militants. After rescuing the injured Havildar, Maj Gahlawat dashed to another hideout, lobbed another grenade killing two more militants. Finding no way out, the militants came out and in sheer desperation faced the Madrasis of Madras Battalion, boldly led by a Jat from Rohtak district out in the open. Major Gahlawat, on the war cry 'Veer Madrasi, Adi kul, Adi kul, Adi Kul' led the charge on the group of militants. During hand-to-hand close combat that ensued, Maj Gahlawat was grievously injured but kept engaging the militants till all his men were extricated to a safe position. The remaining militants hiding in the hideout fled for safety. Immediately, Maj Gahlawat was evacuated to the Field Hospital but the braveheart succumbed en route due to fatal injuries on the vital organs and excessive loss of blood. For his bold leadership, outstanding camaraderie and supreme sacrifice in taking the highly indoctrinated militants head on, Major Sajjan Singh Gahlawat was awarded the Shaurya Chakra, posthumously."