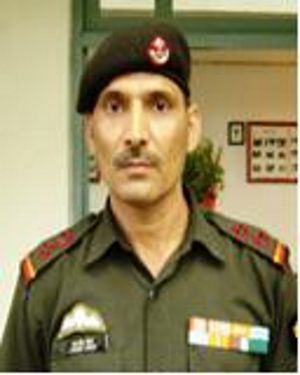 It was composed of the Jat peasantry from Jhajjar tehsil of Rohtak district of then undivided Punjab. A sizeable number of Lancers in the regiment belonged to Silani village adjacent to Jhajjar. And thence, began the tradition of men from Silani joining the defence services.

Son of an ex-serviceman, Jagbir Singh, after matriculation from the village high school, carried forward the village tradition and got himself enrolled in the 19th Battalion of Rajputana Rifles (Raj Rif) on October 6, 1980. 19 Raj Rif was raised on September 1, 1962 at Delhi Cantonment.

Incidentally, Second Lieutenant Rajendra Kadyan, a junior-most ranking officer, was the first to report for the raising. He rose to the rank of Lieutenant General and retired as the Deputy Chief of the Army Staff.

19 Raj Rif is also one of the battalions which took the sheen out of the Tamil Eelam Tigers in Sri Lanka, earning a well-deserved Vir Chakra and two Sena Medals for gallantry.

Quite early in service, Sepoy Jagbir, with athletic built and proven record of physical fitness, cleared all preliminaries including five mandatory parachute jumps and became a para-reservist. He also qualified to become a Special Action Group Commando.

In 2003, 19 Raj Rif was moved to Jammu and Kashmir for anti-militancy operations. Its area of responsibility encompassed the entire Bandipur district north east of Wular Lake.

By the time the battalion was inducted into Jammu and Kashmir, the Kashmir valley had become the hotbed of militancy. Even the misguided youth in the valley had started joining the Pakistani intruders and foreign-trained and armed mercenaries, thereby making the task of the security forces all the more difficult.

Within a short period after its induction into the valley, the battalion familiarised itself well with the demography of the affected area and modus operandi of the militants and began performing its role in earnest.

During its two-year tenure in the valley, 19 Raj Rif had an impressive record of successful cordon and search operations. In one such operation, Naib Subedar Jagbir Singh Chahar of 19 Raj Rif — for his raw courage and unmatched gallantry — was awarded the Shaurya Chakra.

Naib Subedar Jagbir Singh Chahar, SC, a qualified para-reservist as well as a trained commando, had a successful tenure as an instructor with 51 Special Action Group, which is now the core operational group of the present-day National Security Guard (NSG). He was also part of a Gorkha Battalion on UN Mission in Sudan in Africa.

After rendering 30 years of commendable service, Naib Subedar Jagbir Singh retired from the Army in the honorary rank of Captain.

Rakesh, one of his sons, followed the village tradition and is now a third generation Chahar in uniform serving in one of the Signal Regiments of the Indian Army.

“A military career has always been the cherished dream of Chahars of Silani and almost every household in the village has at least one member in uniform, some even more,” proudly claims Honorary Captain Jagbir Singh Chahar, the living legend from Silani village.

There are still some families in Silani who are carrying forward the legacy of the first All-Jat Cavalry of the British Indian Army. The only difference is that then, they were Lancers on horseback but now, they form part of almost all branches of the Indian Army.

Bravery recorded in digest of service of 19 Raj Rif reads

“19 Rajputana Rifles Battalion was deployed in Kashmir Valley with its headquarters at Bandipur. Based on inputs collated in battalion headquarters at 12 noon on May 6, 2004, a part of Buth forest lying east of Bilal Colony in Bandipur area was suspected to have harboured some militants. Immediately, the area was cordoned off by three teams for search-and-destroy operation. One of the teams was led by Naib Subedar Jagbir Singh.

The team started diligently searching the dense forest with thick undergrowth. At 1400 hours, Naib Subedar Jagbir Singh Chahar, the team leader, moving stealthily, reached a hideout and detected some terrorists. With complete disregard to his personal safety, he closed in on them and lobbed a hand grenade and charged on the terrorists, killing two of them on the spot while the others escaped. After informing his Commanding Officer about the progress so far, he organised his team in the search of others. At 1600 hours, the terrorists fired again on Naib Subedar Jagbir and his search team, injuring Rifleman Rajesh. The Junior Commissioned Officer manoeuvred and displayed raw courage and gallantry of a high order in eliminating the third terrorist and then personally evacuating Rifleman Rajesh up to the road head. In the operation, a total of six hardcore Pakistani terrorists were killed, of whom three were killed by Naib Subedar Jagbir Singh singlehandedly. For this gallant act of exceptional bravery in the highest traditions of the Indian Army, Naib Subedar Jagbir Singh Chahar was awarded the Shaurya Chakra”.