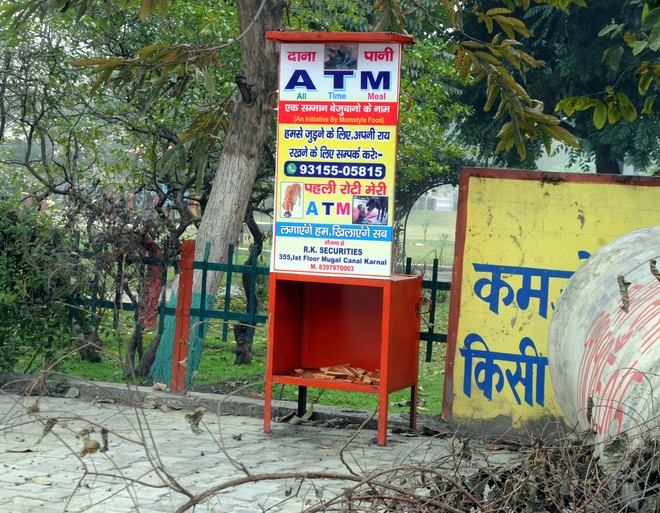 To ensure that animals and birds get food, all-time meal (ATM) facility has been provided in various parts of the state, including six in Karnal district, where anyone can drop food for animals, who can come here and go after having their meal.

‘Momstyle food’, a Gharaunda-based NGO, with the help of a Rohtak-based NGO and two Karnal-based NGOs have installed 29 ATMs in the state. The upper part of these ATMs is being used for birds, while people can drop food in the lower part, which is easily accessible by animals be it stray dog, cattle, cat or any other.

The members of these NGOs monitor these ATMs daily to ensure that the food is safe for consumption.

Gaurav Khurana, the brain behind this project and founder of Momstyle food, said the idea for this initiative came to him when he was serving food to stray dogs outside his residence in Gharaunda. After this, he contacted his friends and relatives for this cause. “I formed an NGO in November and included 10 others members from the society,” said Khurana.

The first ATM was installed in Panipat, later in Karnal, Rohtak, Gharaunda and Samalkha. Earlier, the NGO spent money on these ATMs and now, some other NGOs are supporting to their cause. The cost of one iron made ATM is Rs3,100. “We mention the name of the sponsor of the ATM at the bottom of it,” he adds.

The purpose of this NGO is to sensitise people about stray animals, so that no stray animal sleeps with an empty stomach. The ATMs are installed with the consent of people of the locality, so that these get food from people in the vicinity without any break. The members of the NGOs take care of these ATMs, Khurana said.

The members involved in this social cause educate people to pack their food and donate it at the ATM. The effort is visible at the ATMs, as people are coming forward and donating food regularly, he said. “I started work for stray animals in January 2019. I was impressed with the concept of Gaurav Khurana and I extended my support to his campaign. I got constructed two ATMs in Karnal city — one outside a gurdwara on Kaithal Road and second outside a gurdwara in Shiv Colony,” said Daljeet Sahi from Voice of Voiceless. Her dream is to install such ATMs in all parts of the district, so that all stray animals get food.

“I have a desire to install such ATMs in all parts of the district for the welfare of stray animals,” she said.

Alka Kalra, founder of Path of Voiceless, who is also an animal activist, started work for stray animals around four years ago. Initially, she started from feeding stray animals and later she started the treatment of ailing animals. After coming in contact with Momstyle food, she got installed an ATM in city’s New Housing Board area. “I personally visit the ATM twice a day. People have started dropping meal in the ATM,” Alka said.

She wants the state government to take an initiative to control the population of stray dogs, as it had become a menace in the city. The Karnal Municipal Corporation should initiate sterilisation to control their population. Besides, anti-rabies vaccine should be administrated to these stray dogs to save the lives of people.

“Our NGO has 40 members and we are going to start anti-rabies campaign in the city. We will inject anti-rabies vaccines to stray dogs by organising camps in various parts of the city,” she said.