Cannabis is no better than a placebo for treating pain, finds new research : The Tribune India

Cannabis is no better than a placebo for treating pain, finds new research

Meta-analysis show that pain is rated as being significantly less intense after treatment with a placebo, with a moderate to large effect depending on each person 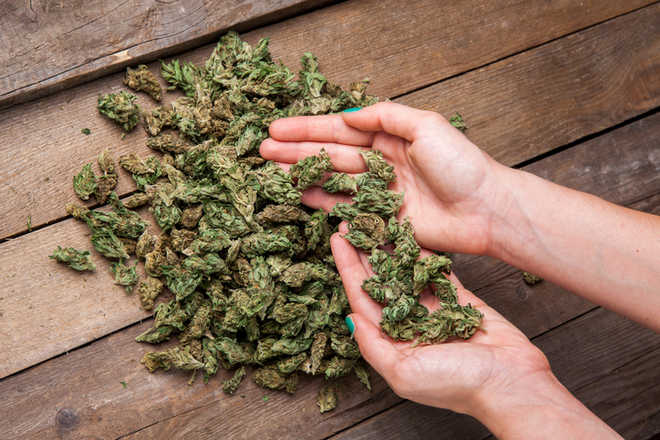 Cannabis is one of the most widely used drugs in the world. While there are only a few countries where cannabis is legal for recreational use, many more countries have legalised the use of cannabis for medical reasons.

Reducing pain is one of the most common reasons people report using medical cannabis. According to a US national survey, 17 per cent of respondents who had reported using cannabis in the past year had been prescribed medical cannabis.

When it comes to self-medication, the numbers are even higher – with estimates that between 17-30 per cent of adults in North America, Europe and Australia reporting they use it to manage pain.

Although cannabis (and cannabis-derived products, such as CBD) may be widely used for reducing pain, how effective it really is in doing this is still unclear. This is what our recent systematic review and meta-analysis sought to uncover.

Our study, published in the Journal of the American Medical Association, suggests cannabis is no better at relieving pain than a placebo.

To conduct our study, we looked at the results of randomised controlled trials in which cannabis was compared with a placebo for the treatment of clinical pain. We specifically included studies that compared the change in pain intensity before and after treatment. In total, we looked at 20 studies involving almost 1,500 people altogether.

The studies we included looked at a variety of different pain conditions (such as neuropathic pain, which is caused by damage to the nerves, and multiple sclerosis) and types of cannabis products – including THC, CBD and synthetic cannabis (such as nabilone). These treatments were administered in a variety of ways, including via pill, spray, oil and smoked.

The majority of the study’s participants were female (62 per cent) and aged between 33 and 62. Most of the studies were conducted in the US, UK or Canada – though we also included studies from Brazil, Belgium, Germany, France, the Netherlands, Israel, the Czech Republic and Spain.

Our meta-analysis showed that pain was rated as being significantly less intense after treatment with a placebo, with a moderate to large effect depending on each person. Our team also observed no significant difference between cannabis and a placebo for reducing pain.

This corroborates the results of a 2021 meta-analysis. In fact, this 2021 meta-analysis also found that higher-quality studies with better blinding procedures (where both participants and researchers are unaware of who is receiving the active substance) actually had higher placebo responses.

This suggests that some placebo-controlled cannabis trials fail to ensure correct blinding, which may have led to an overestimation of the effectiveness of medical cannabis.

Our study also revealed many participants can distinguish between a placebo and active cannabis, despite having the same odour, taste and appearance. If they are aware that they are receiving or not receiving cannabinoids, they are more likely to provide a biased assessment of the effectiveness of the intervention. So to ensure researchers are observing the actual effect of cannabis, participants can’t know what they receive.

Our study also examined the way the studies were covered by the media and academic journals to see whether it related to the therapeutic effect participants reported. We did this because research has shown media coverage and information on the internet can affect the expectations that a person has of a treatment.

Media presence was measured through Altmetric, which is a method of evaluating mentions of a study in the media, blogs and on social media. Academic impact was measured in terms of citations by other researchers. We found a total of 136 news items in the media and blogs.

We categorised coverage as positive, negative or neutral depending on how the results were presenting concerning the effectiveness of cannabis for treating pain. The overwhelming majority of news items reported that cannabis had a positive effect for treating pain. This means that media coverage towards cannabis tends to be positive, regardless of what a study’s outcomes actually were.

There are numerous examples of the relationship between treatment expectations and placebo responses. If a person thinks they will experience relief from their pain by using a certain product or treatment, this can change the way they end up perceiving incoming pain signals – making them think their pain is less severe. Recent evidence suggests that the placebo effect may work even if we’re presented with evidence that contradicts our initial expectations.

We cannot say with 100 per cent certainty that media coverage is responsible for the high placebo response observed in our review.

But given placebos were shown to be just as good as cannabis for managing pain, our results show just how important it is to think about the placebo effect and how it can be influenced by external factors – such as media coverage. For treatments, such as cannabinoids, that receive a lot of media attention, we need to be extra rigorous in our clinical trials. (This article is syndicated by PTI from The Conversation)