1 of 4 trekkers from West Bengal on their way to Mt Tibba in Malana returns; Manali mountaineering teams leave to trace 3 missing members : The Tribune India

1 of 4 trekkers from West Bengal on their way to Mt Tibba in Malana returns; Manali mountaineering teams leave to trace 3 missing members 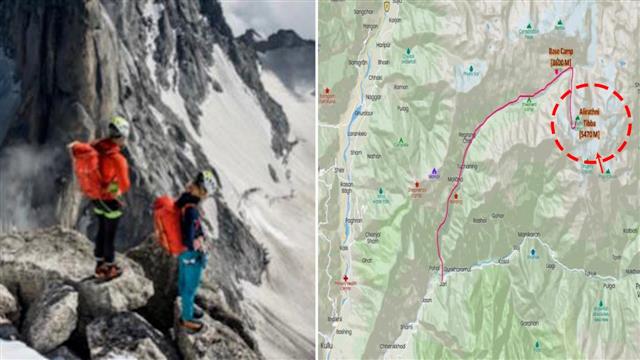 Four trekkers from West Bengal on their way to Mt Ali Ratni Tibba (5458m) in Malana area of Kullu district were reported to be missingsince September 7.

While one member returned to Wachem (near Malana) and informed about the incident, the other trekkers still remain untraceable. The four trekkers from West Bengal include Abhijit Bani (43), Chinmoy Mondal (43), Dibash Das (37) andBinoy Das (31).

A rescue team from Atal Bihari Mountaineering Institute Manali have left for the spot from where they went missing to trace the trekkers.

Kullu SDM Vikas Shukla said that one trekker has returned and they were on the basic of the inputs being provided by him to them trying to find the other three. He said it’s a vast area and take hours to reach the spot. He siad the teams has been equipped with satellite phone to be able to help in tracing the trekkers.

Manali SDM Surinder Thakur said that the team will be accompanied by a local rescue team from Jari.

Despite the respective district administration banning trekking activities during inclement weather, trekkers continue embarking on these expeditions. Often, the local administration is not even informed about their plans, despite this being made mandatory by the Government. It was earlier this week that one tourist from West Bengal died in Kinnaur after having a fall while another sustained injuries.

The team had started their trek from Uttarkashi in Uttarakhand and were heading for Chitkul when the mishap occurred.