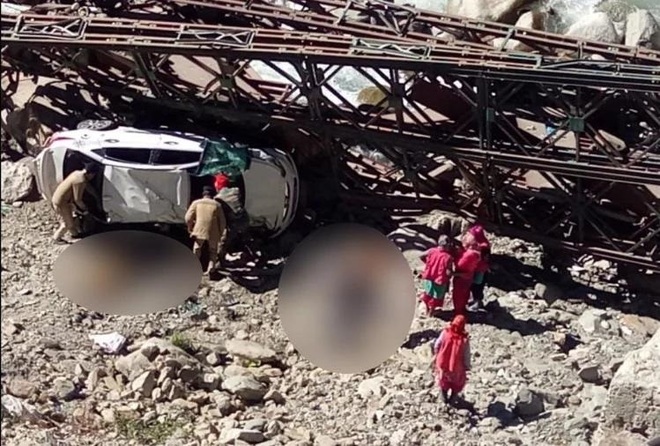 The ill-fated car that fell in the Dhundi nullah near the Atal Tunnel in Lahaul and Spiti district on Friday.

Two tourists from Rajasthan were killed while as many were injured when their car fell into a nullah near the Dhundi bridge close to the south portal of the Atal Tunnel in Lahaul and Spiti district today.

Kullu SP Gaurav Singh said the deceased were identified as Amit Singh Chouhan and Mohit Singh from Jaipur. The injured, Ajit Rawat and Nikhil, were admitted to a Manali hospital.

A man was killed as his scooty collided with a multi-utility vehicle (MUV) near a factory at Raison, 11 km from here, on the Kullu-Manali national highway on Thursday.

SP Gaurav Singh said that Rakesh Kumar of Vashisht village in Manali was going in an MUV from Kullu towards Manali and Kushal Kumar (32) of Thras village in Bhuntar was coming on a scooty from the opposite direction. He said the speeding MUV hit the scooty and Kushal fell unconscious.

The SP said Rakesh rushed Kushal to a Kullu hospital where doctors declared him dead.