Rules say only kids above eight years can fly in tandem 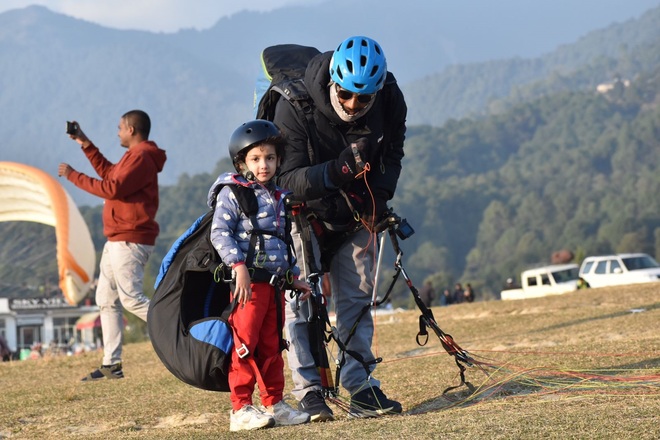 Four-year-old Inyati Gupta, who flew in a tandem flight, in violation of the rules, at Billing on Monday. Tribune photo

In blatant violation of paragliding guidelines, a four-year-old girl flew from Billing in a tandem flight and landed at the Chogan site yesterday.

Inyati Gupta of Pathankot stunned everybody by flying in high Dhauladhars for more than half an hour and later landing safely at the Chogan site. She was accompanied to Billing by her parents Radhika and Arjun Gupta. The parents said that the child insisted on flying in a paraglider and they took the risk.

As per the rules, only children above eight years of age can fly in tandem and to date no underage child has ever taken a paraglider flight from Billing.

Information gathered by The Tribune revealed that the local authorities had termed the pilot’s decision to allow the four-year-old girl to fly with him as a ‘major blunder’. It was very risky as the girl child could have collapsed in the air. The pilot should not have agreed to the request of her parents to fly with a very small child.

Salem Aazam, SDM, Baijnath said action would be taken against the pilot and a show cause notice was being issued to him. He would also write to the Tourism Department to cancel his licence.

He said that the pilot ignored the safety guidelines issued by the state government and virtually played with the life of the tourist. He added that it was an admitted fact that tourists are not well conversant with the rules but the pilot are made aware of proper safety guidelines from time to time by the government and they are bound to follow them.

Ran Vijay Singh, a paragliding supervisor, said that as per the rules, a child above eight years with a bodyweight of 25 kg was allowed to fly in tandem.