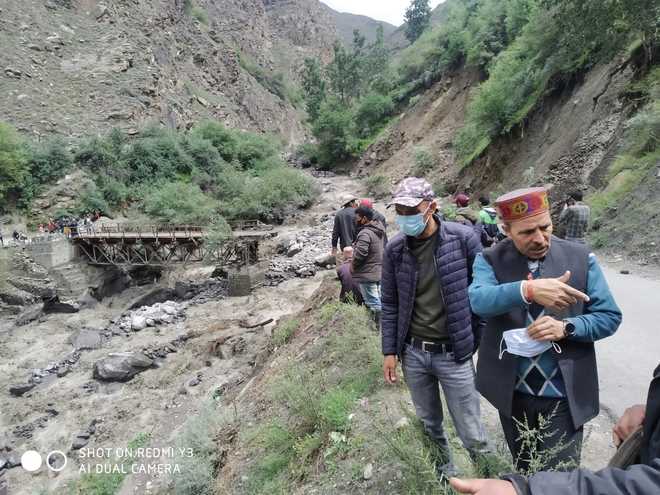 National Disaster Response Force (NDRF) personnel today led the search operation to trace the three persons, who were reportedly washed away in the Tozing Nullah in Lahaul and Spiti district three days ago. Police and ITBP personnel and the Lahaul and Spiti administration assisted in the search operation. Four persons are also missing in Kullu district. However, no headway was achieved till the filing of the report.

As many as 185 tourists are still stranded in Lahaul and Spiti since Tuesday after a flash flood snapped the road connectivity in the region.

On Tuesday night, 12 persons were washed away in the Tozing Nullah. Two persons were rescued the same night, while seven bodies were recovered yesterday. Three persons are still missing.

Meanwhile, Deputy Commissioner, Lahaul and Spiti, Neeraj Kumar said, “The Border Roads Organisation is making all efforts to restore the Madgran bridge that connects Udaipur to the Pangi valley in Chamba district by tomorrow. The damaged road to Shansha and Thirot bridges will also be restored as soon as the water level recedes”.

“The Jahlma bridge was washed away in the flash flood. The work to construct a ropeway and a paedestrian path as an alternative arrangement will be expedited. The Pattan valley has been affected due to heavy rains and the flash flood that have caused considerable losses to the agriculture sector. Remedial steps are being taken under the action plan to restore normal life,” he said.

“As many as 185 pilgrims, who were stranded due to the flood, are safe and have been accommodated at the Triloknath temple complex. The temple trust is making arrangements for their stay and food. Pilgrims belonging to the Pangi area will be able to easily go back after the Madgran bridge is restored. Most of the devotees belong to Kullu district and arrangements are also being made for their return,” said Neeraj.

In Kullu district, no breakthrough has been made in tracing the missing persons. SP, Kullu, Gurdev Sharma said that the search operation was continuing in Manikaran valley to trace four persons, who were washed away in the Bramganga Nullah, a tributary of the Parbati river yesterday.