Administration looks for alternative land for CUHP in Dharamsala 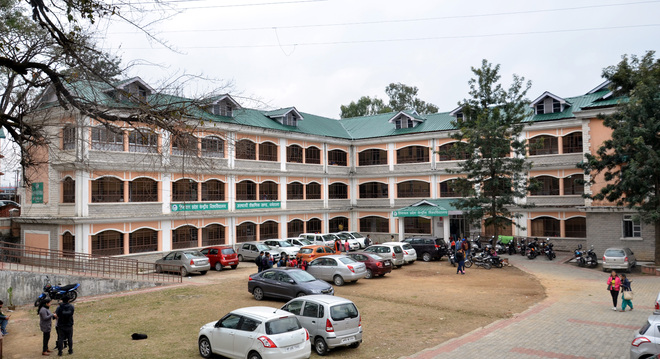 The temporary campus of the CUHP in Dharamsala.

Uncertainty prevails over the allotment of land offered for the Central University of Himachal Pradesh (CUHP) at Jadrangal in Dharamsala. The Kangra district administration is now looking for an alternative land for the north campus. The land for the south campus at Dehra has been transferred in the name of the institution.

In July, a Geological Survey of India (GSI) team from Shimla had found the land, offered at Jadrangal, unsafe for the campus.

The university administration had written to

the GSI head office in Kolkata to carry out further investigation to ascertain the geological stability of the proposed campus in Dharamsala.

A team from Kolkata

Vice-Chancellor Sat Prakash Bansal says that he will not comment on the development until something is finalised regarding the CUHP north campus land.

Deputy Commissioner Nipun Jindal says, “We are looking for an alternative land for the campus. If the GSI team finds Jadrangal land unfit for development, we should have an alternative land ready for immediate transfer to the CUHP so that the construction work can start”. The CUHP authorities had identified land at Sakoh but did not find it fit as it also involved forestland.

Forest Minister Rakesh Pathania says that the land offered for the CUHP at Jadrangal is in patches. They are trying to consolidate it so that the forest clearance can be received easily. Meanwhile, the issue has started gathering political heat as Congress leaders are alleging discrimination against the Dharamsala region. However, the real sufferers are students and teachers.