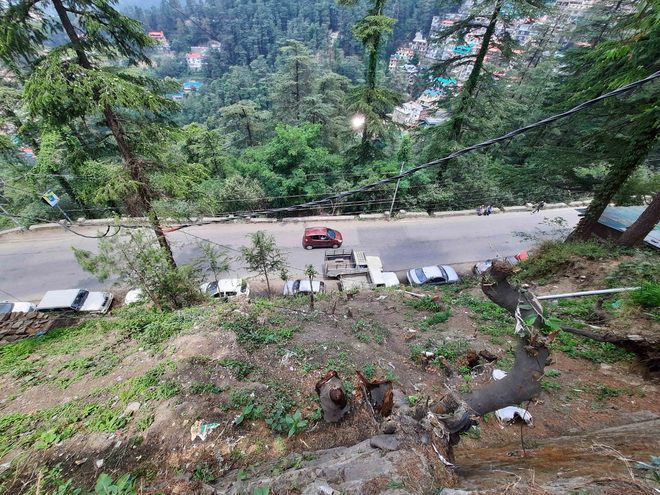 The axed trees in the Khalini area of Shimla. Tribune photo

Taking advantage of the curfew in view of the continuing pandemic, some people with vested interests are indulging in illegal felling of trees. The operations are mostly carried out at night when there is no public movement.

A startling case has come to light in the main town where about 15- 20 trees and bushes have been chopped in Khalini main market on private land. The trees were axed on a patch of land between the Khalini bazaar road and Shimla bypass road, opposite Keonthal Banquet Hall.

The locals complained that the land was recently purchased by a private party following which the felling of trees took place mainly at night after curfew was imposed on May 7 last due to which the movement was restricted.

Permission of cutting trees on private land within the municipal limits is mandatory from the Tree Authority Committee (TAC) of the Shimla Municipal Corporation (SMC) but no such permission was taken from the concerned authorities or the forest department.

When contacted, District Forest Officer (DFO) Shimla (Urban) Pawan Chauhan said that the damage report has been prepared and a challan would be put up in the court.

As per the damage report prepared by the Forest Department five trees of paja, roberia and ailanthus varieties have been cut while the others small trees fall in the category of bushes.

Earlier, the Electricity Department had pruned the branches of deodar trees that were obstructing the power transmission lines in this area.

The owner of this land allegedly took advantage of the ongoing pruning and got trees chopped off. The owner later admitted the lapse but maintained that he only asked for removal of the bushes and trees were also felled, forest officials said.

It may be recalled that on May 4 last, the Himachal High Court had stayed all permissions of felling or chopping of trees in the Shimla Municipal area, except by the state electricity board.