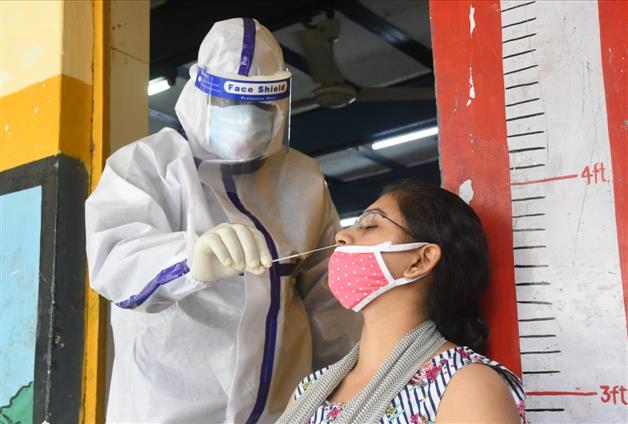 Chamba reported seven new cases of the deadly disease, taking the total in the district to 68.

Chamba reported seven new cases of the deadly disease, taking the total in the district to 68.

A 31-year-old ITBP jawan, who had recently travelled from Kerala, tested positive, along with his wife and two children in Kharagat Samote village. They had mild symptoms and were kept under institutional quarantine.

A 27-year-old man, an ITBP jawan, a resident of village Maretta in Bhatiyat area of Chamba district and another ITBP personnel, a resident of Garnota Samote village also tested positive for the contagion. The duo had returned from Kerela.

A 26-year-old Army personnel, a resident of village Kandei in Dalhousie area of Chamba district, who travelled from Roorkee, also tested positive.

All the said patients were asymptomatic or had mild symptoms said CMO Chamba Dr Rajesh Guleri. Chamba district now has 68 positive cases, including 16 active cases while 51 people have been cured.

Solan reported 48 new cases of the deadly disease, taking the total in the district to 257.

The industrial belt of Baddi-Barotiwala-Nalagarh registered the highest ever spike in COVID-19 cases with 69 people testing positive on Monday night.

They were in the age group of 25 to 55 years and, apart from three, the majority who were locals. Some of them were the migrants who were the contacts of earlier cases detected at the Wrigley India industrial unit.

Medical Officer Health, Dr NK Gupta, said the tally of cases in Solan district tally now has climbed to 257, out which 153 cases are active.

Notably, BBN industrial belt is a subdivision but has the third-highest cases after districts like Kangra and Hamirpur. With limited space to house the new cases health officials were facing a major challenge.

Dr Gupta said the symptomatic patients will be shifted to COVID hospitals while others will be confined to hotels where they were quarantined after contact tracing.