CM to embark on Rath Yatra from April 15; to travel extensively in Himachal 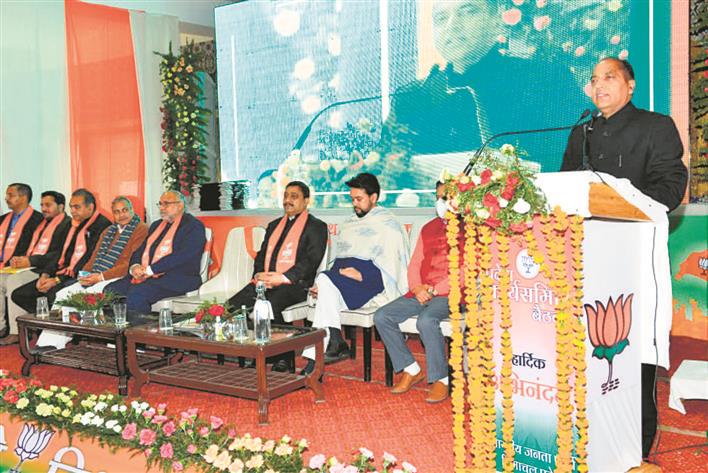 While addressing the BJP workers on the concluding day of the state BJP executive today, Chief Minister Jai Ram Thakur said that the farmers of Himachal were with the BJP and would benefit from the farm laws. A handful of people were trying to misguide the farmers. The farmers have understood their design and have now returned to their fields.

The Chief Minister like national president of party JP Nadda stressed on the Mission Repeat in 2022. He said that it was a blot on state BJP that it has not been able to repeat government in Himachal. However, the party would create history by repeated the government in Himachal, he said.

Thakur said that due to Corona pandemic one year of his government had been wasted and he practically had just four years for development. Still foundation stones had been laid and projects worth Rs 3,500 crore had been inaugurated in Himachal Pradesh, he said.

He said that he would launch the Swaran Jyanti Rath Yatra in the state on April 15 to mark 50 years of statehood of Himachal. This would also help re-establish mass contact with people in the state. During this Rath Yatra he will travel extensively in all parts of the state.

He said that the BJP was winning elections not just due to developmental projects but due to its strong organization. The Himachal model of the BJP was being praised in the entire country. Thakur congratulated party workers for success in recently panchayat and municipal council elections in the state.

Anurag Thakur, Union Minister of State for Finance and Corporate Affairs said that the Central Government was for reforms and performance. He said the reforms being carried out by Prime Minister Narendra Modi government would help in making India an economic super power.

The NDA government in the past six years has adopted 1991 reforms which would help achieve 5 trillion dollar economy target by 2025 set by the present government. Eliminating middlemen and giving corruption-free government was also a big achievement of PM Modi government, he said.