Interacts with families whose houses were damaged 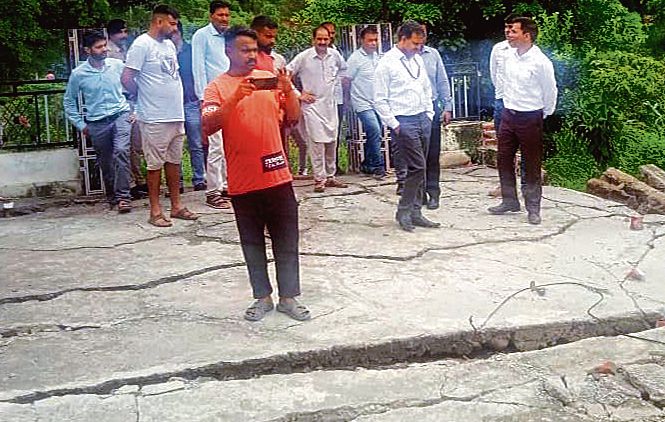 The team, accompanied by SDM, Nurpur, Anil Bhardwaj visited Bariara village of Khel gram panchayat in Nurpur where a large piece of land sank on August 20 night, rendering seven families homeless. The team inspected the damaged houses which witnessed big cracks in walls, roofs and corridors of five pucca and two kucha houses. It also interacted with the affected families.

Officials of the Public Works Department and the Jal Shakti Vibhag were also present, who briefed the team about the loss of a road stretch between the Khel-Jonta link road. The Bariara drinking water supply scheme was also hit by massive landslides.

Team members included Vivek KV, Assistant Secretary, Department of Expenditure, and Piyush Ranjan, Director, Central Water Commission, Shimla. They were to inspect a road bridge over Chakki at Kandwal in Nurpur where its two pillars had suffered damage due to flash floods and the railway bridge over the rivulet which had been washed away in on August 20.

But the team rushed to Bhattiyat in Chamba district where torrential rain had triggered massive landslides, causing a huge loss to roads and properties.

Earlier, the Central team inspected the landslide-hit Pathankot-Mandi highway at Chambi and also assessed the losses at Harnera and Manjhgran villages of Shahpur in Kangra district.

The SDM said the team would visit the Nurpur and Indora tomorrow.

Chamba: The Central team took stock of the damage to various projects due to heavy rain and cloudbursts. Deputy Commissioner DC Rana said the district had suffered an estimated loss of Rs 145 crore.

Kullu: The Central team also visited Manali, Manikaran and Tirthan valleys. Deputy Commissioner Ashutosh Garg said since June 24, a loss of about Rs 117 crore has been assessed in the district.