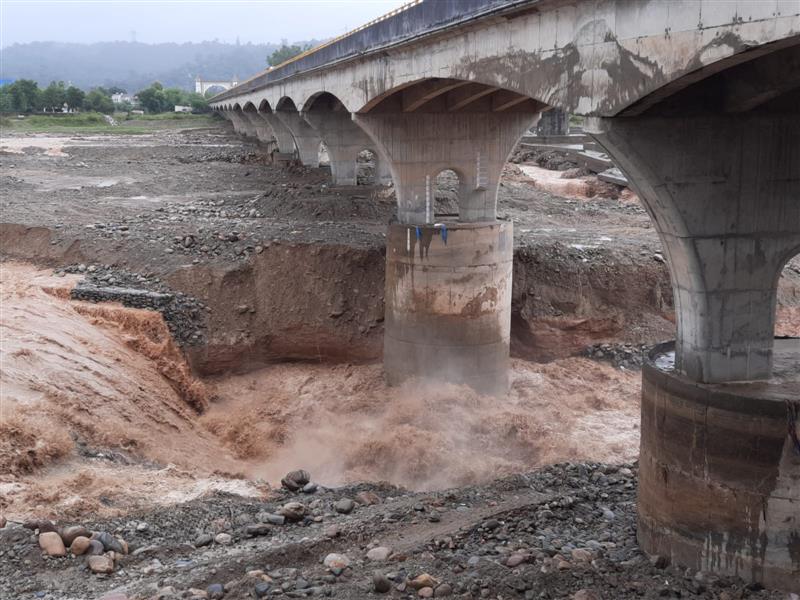 One of the exposed pillars of the Chakki bridge was hit by flash flood at Kandwal in Nurpur. Tribune photo

Iron wires and stones used to protect two exposed pillars of the Chakki river bridge were washed away today following flash flood triggered by heavy rain in the upper areas. The government had spent lakhs of rupees on the protection work.

It forced the NHAI to close the inter-state bridge again. It was opened eight days ago for heavy and loaded vehicles. The NHAI machinery had diverted the river course away from the two exposed pillars.

Keeping in view the safety of the endangered bridge on the Pathankot-Mandi National Highway at Kandwal in Nurpur, the NHAI has written to the DC, Kangra, and the DC, Pathankot, asking them to order closure of the bridge for traffic with immediate effect.

In the letter, the NHAI has admitted that a massive damage had been caused to the garlanding work undertaken around pillar 1 and 2.

SDM, Nurpur, Anil Bhardwaj told The Tribune that after getting a communique from the NHAI, the administration had closed the bridge for heavy and loaded vehicles at 7 pm. It would also be closed for light passenger vehicles at 6 am tomorrow. He said traffic had been diverted via Kandwal-Lodhwan-Pathankot link road.

The bridge, after the completion of the pillar protection work, had been opened on September 18 after 25 days by the NHAI. Initially, the bridge had been closed for traffic on August 20 and re-opened on August 22 but again it had been closed on August 25. The NHAI had deployed its machinery to divert the course of the river and also started work to save the pillars from further exposure from the riverbed.