Chaos as people scramble for jabs in Himachal's Solan 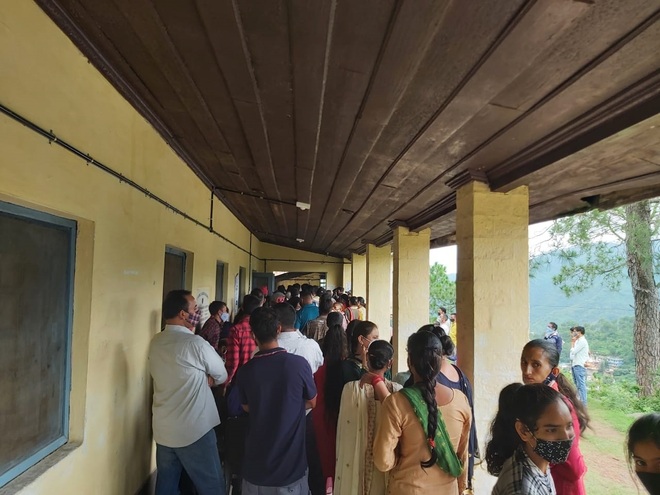 Social distancing goes for a toss as people throng a vaccination centre in Dharampur.

Chaos prevailed at several centres as the state government resumed vaccination at common centres from today.

As per the new arrangement, all age groups can be vaccinated at a common centre. Earlier separate days were earmarked for vaccinating 18 — 44 age group, 45 plus and other priority groups. The staggered arrangement had streamlined the process as only limited people used to turn up at each centre.

Since vaccination had been put on hold for the 18- 44 age group earlier this month owing to shortage of vaccines, a significant number of people from this age group turned up at various centres to get jabs today. Chaotic scenes were witnessed at Dharampur and Deothi centres as Covid norms went for a toss.

Beneficiaries, who had booked online slots, had to jostle to secure registration. The health staff engaged in administering the jab had a tough time managing the huge rush as people were desperate to get the jabs.

Amid reports of a looming third wave, desperation was seen in the crowd. “Several people, who had booked online slots, had to return without getting a jab amid huge rush and chaos at Dharampur vaccination centre,” informed Ravi, who was among those who failed to get the jab.

A lone policeman found it difficult to manage the crowd. “More policemen were sent to the vaccination centre at Dharampur in view of the large turnout,” informed sources at Dharampur.

The health department has put a cap on the number of jabs which can be administered daily in each district.

In Solan district a maximum of 6,800 people can be vaccinated in a day and 30 to 50 centres are selected by the health officials each day on rotation.

Chief Medical Officer Dr Rajan Uppal said they were vaccinating 4,000 persons per day earlier. Now, 6,800 jabs were being administered in a day. If more doses are allocated they can enhance this number.

A token system was introduced and remaining beneficiaries were directed to turn up the next day, Uppal said.