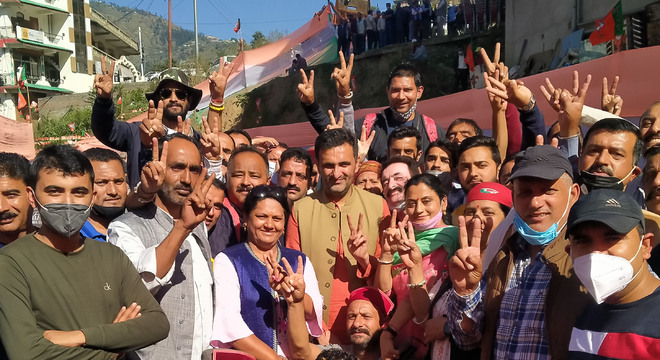 Rebel BJP leader Chetan Bragta, contesting the byelection from Jubbal-Kotkhai as Independent against the party’s Neelam Saraik, has been expelled for six years.

Rebel BJP leader Chetan Bragta, contesting the byelection from Jubbal-Kotkhai as Independent against the party’s Neelam Saraik, has been expelled for six years. He has also been removed from the post of convener, IT cell, by party president Suresh Kashyap.

Despite the best efforts of the BJP to convince rebel candidate to withdraw from the contest, the son of former minister Narinder Bragta has stood his ground.

Chetan’s refusal to withdraw from the contest is bound to make the going tough for BJP candidate Neelam Saraik, who the party chose maintaining its stand against dynastic politics. There will be a triangular contest among the BJP, the Congress and Chetan, with the fear of the ruling party candidate being placed third.

The bypoll is being held following the death of Narinder Bragta (69). The BJP leadership had made up its mind on fielding Chetan and he was asked to start campaigning. It has been Chetan’s biggest grouse that the party should have thought all these factors before asking him to start campaign immediately after his father’s death.

Sources in the saffron party revealed that pressure was mounted by all, including national BJP chief Jagat Prakash Nadda and Chief Minister Jai Ram Thakur on Chetan to withdraw from the contest. He was reportedly assured that his interest would be protected, besides promising him chairmanship of a board or corporation after the bypoll.

Chetan’s family has a considerable political clout in the area as his father won twice from Jubbal-Kotkhai. His father was considered a staunch Dhumal loyalist and was a minister in the former CM’s Cabinet. Chetan (44), an MBA from Pune, could ride high on the sympathy factor.

Sources close to Chetan point out that though supporters and loyalists of his late father maintained pressure on him not to withdraw, he knows that the stand of the BJP on dynastic politics will remain the same even in the next Assembly poll. As such, he chose to remain in the fray and prove his mettle so that the party would consider him for the ticket in the next time.

With Chetan refusing to oblige the BJP, the split in the party vote bank could prove to be advantageous for Congress candidate Rohit Thakur, grandson of former CM Ram Lal Thakur. He had won twice in the past and the division in the BJP could prove to be a blessing in disguise for Rohit. In the 2017 elections, Bragta defeated Rohit by 1,062 votes.