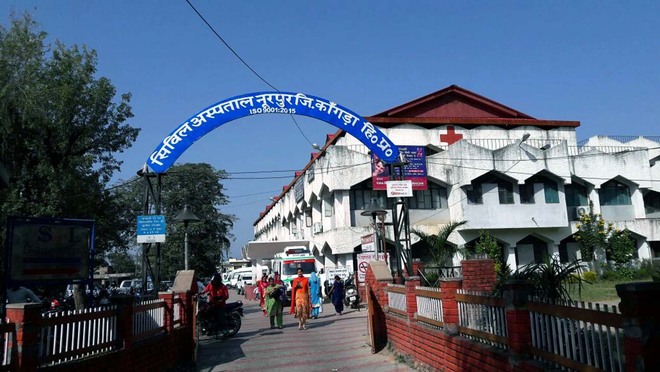 The Nurpur Civil Hospital cries for the attention of the government. Tribune photo

The Nurpur Civil Hospital — which caters to thousands of people in Nurpur, Indora, Jawali, Fatehpur and Bhatiyat subdivisions — is crying for immediate attention of the state government.

Chief Minister Jai Ram Thakur, during his maiden visit to Nurpur on March 3, 2018, had publicly announced to upgrade the hospital from 100 to 200 beds. Besides, he had promised a blood bank to ensure improved medical services in the region.

The government notified the upgrade of the hospital but even after two years, the construction of an additional block of indoor ward to accommodate the sanctioned 100 beds has not been started. This has caused a lot of resentment among residents of the lower Kangra area. Residents have urged the Chief Minister to fulfil his public announcement.

Earlier, too, the Virbhadra Singh government had announced and notified to upgrade this hospital to 135 beds in February 2016 but that notification, too, remained on government record.

Inquiries reveal this hospital has recorded the second highest 2.97 lakh footfall in Out Patient Department (OPD) in Kangra district last year (2019-20) but due to lack of specialty medical services, this hospital has become a referral hospital.

Besides, the hospital has topped in conducting the maximum 100 deliveries on average in a month in the district. At present, posts of gynaecologist, radiologist and ophthalmologist are lying vacant, crippling the specialty medical services in the hospital. The lone physician has also applied for his voluntary retirement on health grounds. The routine checkup of expectant mothers has been badly hit after resignation of the gynecologist. The ultrasound machine is also not in use for the past over one year.

Most of the patients who are being referred to the Tanda medical college in Kangra are rushing to expensive private hospitals at Pathankot in Punjab in emergencies. This hospital is rendering specialty medical services but has no provision to render services of specialists during emergency.

The health department has posted three anesthetics in the hospital but failed to post immediately required pediatrician, physician, radiologist, ophthalmologist and gynecologist.

Hospital in-charge Dr Dilwar Singh said a proposal of identified land (in the hospital complex) for the construction of the additional block had been submitted to the Health Department. Chief Medical Officer (CMO), Kangra, Gurdarshan Gupta said the Public Works Department was asked to prepare a drawing and estimate for the hospital block for additional indoor wards. Gupta said a separate proposal for setting up a blood bank had been submitted to the Director, Health Department, for his nod.