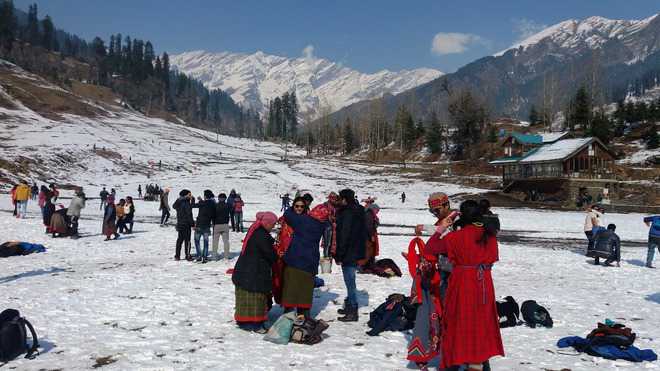 Chief Minister Jai Ram Thakur today ruled out imposing restrictions on the entry of tourists into Himachal as hoteliers and the state economy are affected badly.

“The steep surge in Covid cases clearly indicates that the third wave has hit Himachal and if this trend continues, the government might be forced to impose harsher restrictions,” he said during an informal interaction here. He added within five days, the number of active cases had shot up from 336 to 1,150 today, which is worrisome.

Thakur said that the state government would review the situation after four or five days and depending on the transmission chain, a decision would be taken on imposing more restrictions.

He, however, insisted that precaution was the best solution to fight Covid. “I feel restricting the entry of tourists is not correct, as the economy takes a severe beating. Rather, we have requested hoteliers to ensure that they as well as tourists adhere to Covid-appropriate behaviour,” he said.

He said that the hotel and tourism industry had already taken a severe beating in the past two years and as such restricting the entry of tourist would not be a wise decision. He, however, admitted that if the surge continues, the government would have no option but to impose more restrictions.

Thakur said that the Cabinet at its meeting yesterday had imposed night curfew and put a cap of 50 per cent on all social gatherings indoors. Gymnasiums, spas, clubs, pools, and cinema halls had been closed and langar at religious shrines had been banned, he added.