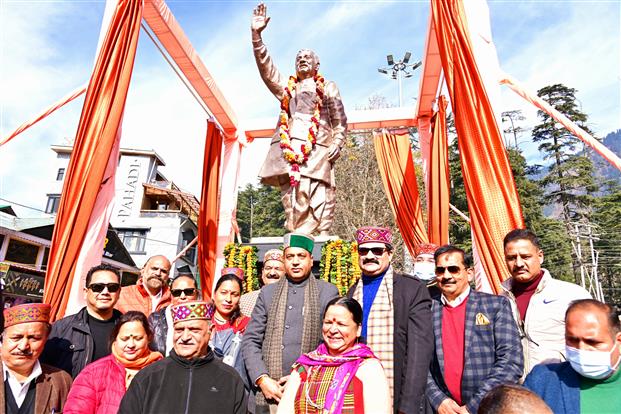 Chief Minister Jai Ram Thakur unveiled a statue of former Prime Minister Atal Bihari Vajpayee on his 97th birth anniversary on the Mall Road in Manali today. The statue has been constructed at a cost of Rs 44 lakh.

The CM also addressed a public gathering at Prini village that has Vajpayee’s residence. He said the people of Kullu district in particular and people of the state in general were fortunate that Vajpayee had special love and showered benevolence on the state and its people.

Rs20 lakh for a community centre and Rs10 lakh for Janj Ghar at Prini village that houses former PM’s abode.

The CM said despite his busy schedule as the Prime Minister, Vajpayee visited Prini every year. He said for a few days, the central government used to function from this small village. Due to the special benevolence of the former PM, the state got liberal assistance from the Centre.

Thakur said even political opponents of Vajpayee would come to listen to his speeches and loved his art of oratory. He said Atal Tunnel was the vision of the former Prime Minister which had virtually transformed the economy of the tribal district of Lahaul & Spiti and was strategically very important.

The Chief Minister said this day was celebrated as ‘Sushasan Divas’ (Good Governance Day) as a mark of respect to the former Prime Minister. He said several schemes of the state government had been named after Atal Bihari Vajpayee as a mark of respect to the beloved leader of the masses. He also recited a few lines from poems of Vajpayee and paid floral tributes to his statue.

The Chief Minister launched Gram Panchayat Gyan Kendra, an initiative of the district administration, from Prini, along with 10 other Gram Panchayat Gyan Kendras of Naggar, Kullu and Banjar Blocks of Kullu district. He said the students would get a 24-hour library facility near their homes and also get Internet facilities to prepare for competitive examinations. He thanked the National Book Trust for providing books to these Gyan Kendras. He also urged the general public to donate books for these centres.

He said since this initiative had been taken on the birth anniversary of Atal Bihari Vajpayee, these Gyan Kendras would be named ‘Atal Gyan Kendras’. He said the state government would provide all possible help to strengthen this initiative.