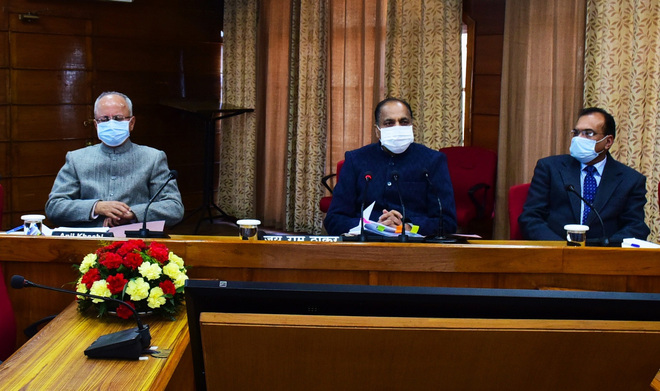 Chief Minister Jai Ram Thakur at a review meet in Shimla on Wednesday.

Chief Minister Jai Ram Thakur has directed the officials concerned to ensure all medical college projects are completed within stipulated time with quality construction. He directed the officers to remove all hindrances and develop an effective mechanism to monitor the progress in these projects.

“On completion of all these medical colleges, the state health infrastructure would get a boost,” the Chief Minister said. At present, the state has six medical colleges in government sector, one in private sector. Besides, AIIMS is coming up at Bilaspur and a PGI Satellite Centre in Una district.

He said Dr YS Parmar Government Medical College, Nahan, was being constructed at a cost of Rs 261 crore. “The teaching block should be completed by March next year. The new medical college building complex will have state of art facilities,” he said.

He said Pandit Jawaharlal Nehru Government Medical College, Chamba, is being constructed 290 crore. In the first phase, a 200-bed hospital, boys and girls’ hostels, residential complexes, etc., would be constructed. “In the second and third phases, administrative block-cum-doctors’ hostels, sarai bhawan and the auditorium, etc., would be completed”, the Chief Minister said.

Dr Radha Krishanan Government Medical College and Hospital at Hamirpur is being constructed at a cost of Rs 355 crore.